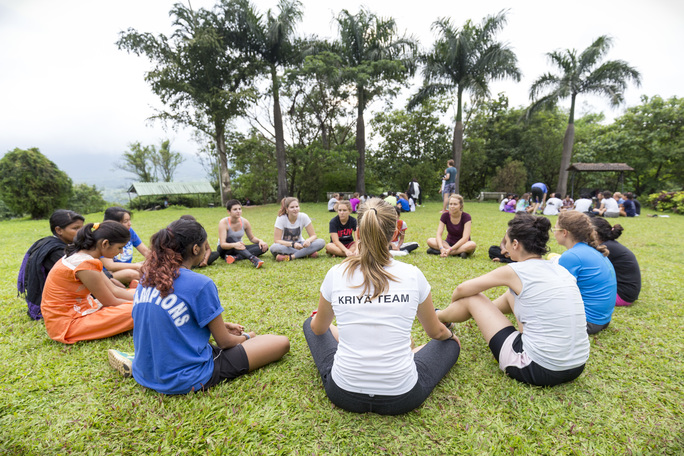 Open to all UWC schools and colleges, and presented by the Aurora Humanitarian Initiative in partnership with UWC International, Young Aurora aims to encourage UWC students to engage in an economically, socially and environmentally sustainable and practical manner with current humanitarian issues affecting a community. Young Aurora recognises student projects designed to have meaningful impact – and provides one winning team each year with a financial grant to further the development of their project.

Project proposals submitted to compete for Young Aurora funding address a broad and diverse range of humanitarian issues identified in the vicinity of UWC schools and colleges, and often propose close collaborations with local communities.

In this third consecutive year of Young Aurora, it is our pleasure to announce that after a highly competitive process involving student-initiated projects from across UWC schools and colleges and the African Leadership Academy, the three project teams selected for the final stage are:

We congratulate all three teams as they prepare to present their projects at the inaugural Aurora Forum in Armenia on 18 October. Read more about the three finalist teams and this year's competition so far here.

Past Years of the Project

In 2017,  the project from UWC Robert Bosch College was announced as the winner of the first-ever Aurora Humanitarian Project for UWC. Thanks to generous donations from anonymous donors, however, the two other finalist teams, from Waterford Kamhlaba UWC of Southern Africa and UWC Mahindra College, also received €4,000 each towards the further development and funding of their respective changemaking projects.

In the second annual Aurora Humanitarian Project for UWC which took place in June 2018, teams from UWC Mahindra College and Waterford Kamhlaba UWC of Southern Africa qualified yet again as finalists,  along with a team from UWC Changshu China. In another fortunate turn of events, although UWC Changshu China's project was chosen as the winner of the $4,000 first place prize, the other two finalist projects were also each awarded $4,000 thanks to the generosity of anonymous donors.

More information about the 2018 AHP finalist projects can be found at the links below:

The finalist teams in the 2018 AHP presented their projects to a panel of esteemed judges in Yerevan, Armenia, who then selected UWC Changshu China's Project HOPE as the year's winner during an event entitled "Galvanizing the World: Aurora Humanitarian Project for UWC Schools and Colleges." Learn more about the final round of selections in the video below (originally posted on Facebook here):

UWC thanks the Aurora Humanitarian Initiative for their continued support of UWC students in their initiatives for meaningful change - helping them to put gratitude in action.