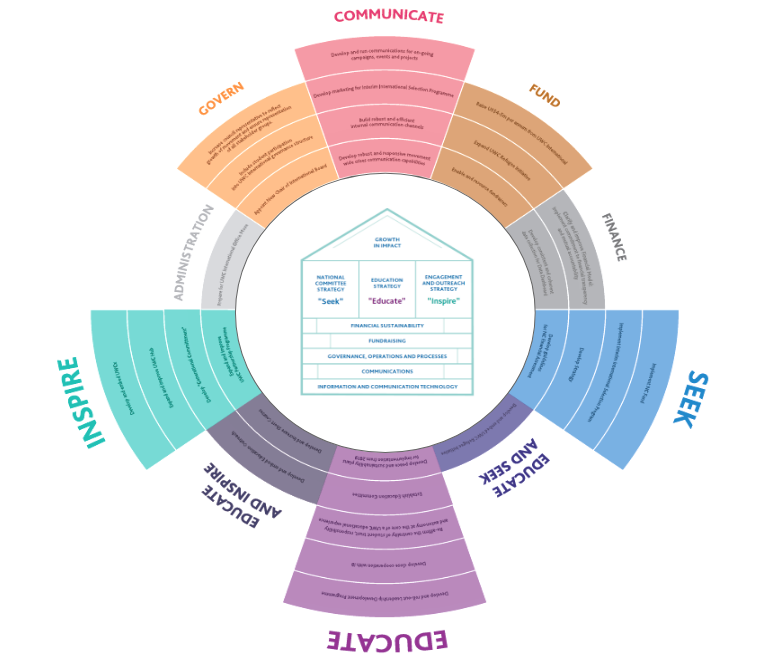 The last week of October 2017 was an important week for the UWC movement: members from all UWC constituencies came together at UWC Robert Bosch College in Freiburg (Germany) to finalise and approve the next UWC Strategy entitled “UWC Strategy – 2018 and Beyond”. Heads and Chairs of all 18 UWC schools and colleges, the members of the Committee of National Committees (CNC) and the UWC Council and  International Board gave final input prior to the Strategy’s official approval by the UWC International Board on 29 October 2017.

This Strategy will inform the work of UWC International and of all UWC constituencies going forward. Its overarching aim is simple: to increase UWC’s impact in making education a force for a more peaceful and sustainable future. It broadens UWC’s ambition from providing transformative education for its students to becoming a global voice for values and diversity based education for peace and sustainability.

"Education has progressed greatly in the last decades in terms of reach and inclusiveness. But the skills that general education imparts can be used for good and for bad. Values and deep encounters with diversity which encourage students to reach across national and social divides are crucial if education is to impart a bias for good, for understanding and reconciliation and if it is to inspire selfless leadership. That was Kurt Hahn's goal - and the new UWC Strategy translates his vision into our programme for the next decade."

His whole introduction to the Strategy can be read here.

The meetings in Freiburg marked the end of a highly participative and almost two-year long process: Under the auspices of the UWC International Board, a Strategy Drafting Group was formed in early 2016 to work on UWC’s next Strategy. Numerous rounds of drafts were debated by all constituencies in several iterations and all members of the UWC community and beyond were consulted on the draft during the UWC Congress held in Italy in 2016 and in a subsequent open online consultation process.

A comprehensive version of the Strategy is available on UWC’s website as of 17 November 2017. It sets out an analysis of UWC’s current opportunities and challenges, and identifies focus areas and objectives for the UWC movement going forward. It is complemented by an Initial Action Plan which outlines the first three years of the Strategy’s implementation.

For those with limited reading time, the published Strategy starts off with an Executive Summary. Shortly, a more externally focused summary version of the Strategy will also be available for any interested third parties.

“Seek, educate, inspire!” – these words frame UWC’s three focus areas and aspirations. By focusing on these three areas, UWC aims to increase its impact and to strengthen its mission to make education a force to unite people, nations and cultures for peace and a sustainable future.

The ambitions in each of these areas reflect the needs of UWC’s diverse constituents: UWC’s unique global national committee system which enables UWC to select students in over 155 countries and territories worldwide, UWC’s 18 schools and colleges on four continents and UWC International, which is comprised of the UWC movement’s governing bodies. This strategic framework also opens the UWC movement to partnerships and direct engagement with the worlds of education and policy, enabling it to promote what a UWC education stands for: celebration of diversity, focus on values, understanding, listening and a striving toward peace, sustainability and social justice.

The Strategy presents concrete ways in which the set objectives will be achieved and clarifies how all UWC constituencies and members will play a role in the implementation of the Strategy: from UWC schools and colleges to national committees, from students to alumni, from staff to volunteers and from donors to partner organisations.

During the course of 2018, schools, colleges and national committees will be asked to translate the principles and objectives of this new Strategy into their own strategies moving forward, taking into account their specific national and cultural contexts. Rather than offering a standardised interpretation of the UWC mission and experience, the strategy values and empowers the diversity within the UWC movement, while ensuring a common strategic direction and unity as an organisation.

We encourage you to read and reflect upon the new UWC Strategy, to understand how each member of the UWC community will work together in the coming years to further the mission and values of UWC throughout the movement and beyond.