Teaching. How hard can it be? 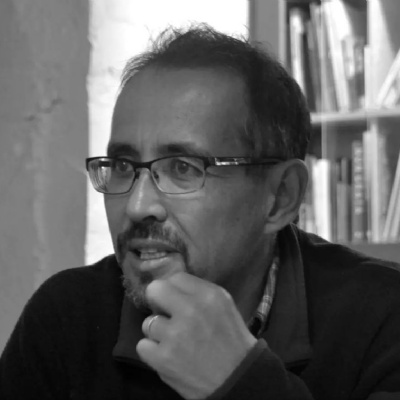 When I was a student I used to trampoline a bit. When I got to the stage of twisting somersaults, I used to get a bit lost up there in the air, and land in rather distressing ways (to both me and anyone watching). Our guru, the wonderfully elegant and controlled Pete (also an o-so glamorous PhD student), worried about my safety, stepped in and offered a demo. I watched a few moves; and then asked him to talk me through it. "It's easy" he said - bounce - "watch this next twist" - bounce - "all you do is take it up" - bounce - "and wrap it" - bounce and twisting straightback somersault, flawlessly landed. Of course I was none-the wiser; what sounds so simple in words is impossible to master or even really grasp without spending deep and extensive time on the details of the task. What does "wrap it" mean? What does it mean for the rate of rotation, the straightness of the back, the thrust of the hips, the direction of sight, and the throw of the arms?

Much the same can be said of many things.  Of course I am thinking about teaching.  I am often asked by people thinking of joining the profession if I can recommend courses, which I willingly do.  Occasionally though, I get a request from someone who asks if I can consider their experience in programming, or finance, or manufacturing, as equivalent to certification and experience.  That seems to me to be like a skilled footballer thinking he can join a trampoline team because he can play a blinder in midfield (of course it goes in other directions too – a teacher thinking his years with grade 9 make him ready to place derivative trades in emerging Namibian Bio-tech would be equally mistaken). 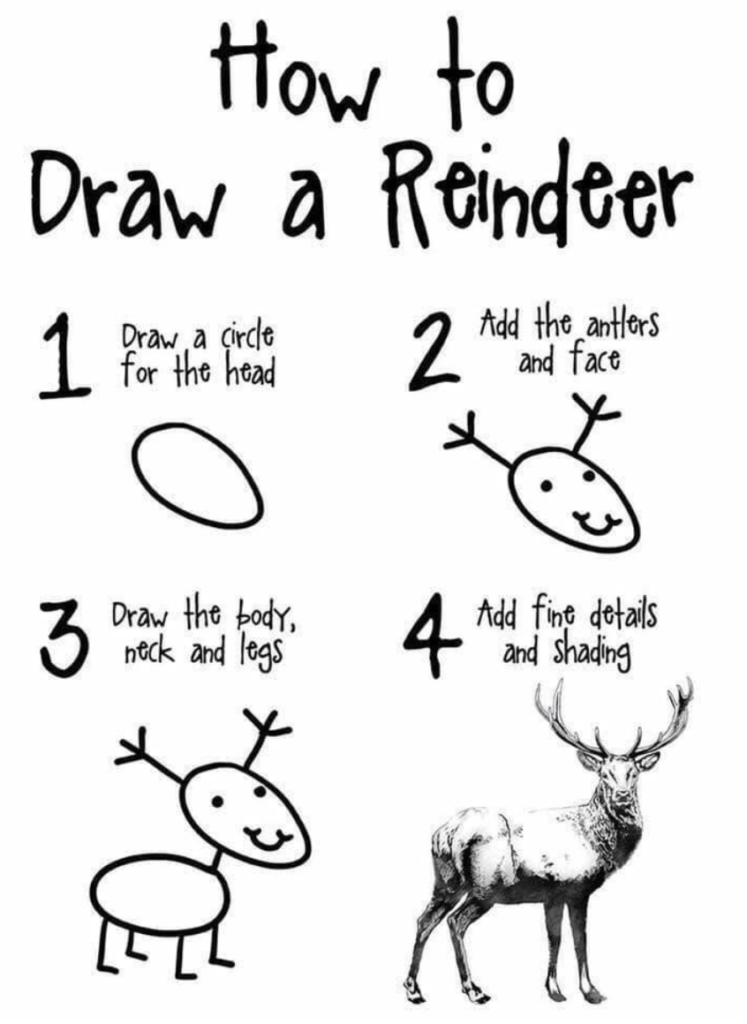 Drawing a deer.
How hard can it be – there are only four steps, right?
Teaching is much the same.

So this is a plea for recognition – because teaching sounds relatively easy. And we’ve all been to school, so we know a bit about it right?  But I suggest that the term teaching is very much like wrap it. Simple sounding – but when you look at “teaching students” and unpack it, you end up asking things like: Where do I stand when they enter?  With what tone and body stance do I greet them?  How do I create a supportive but demanding atmosphere?  How much should I recap the previous lesson?  How do I cater for the student with limited English?  Or the one whose parents are splitting up?  Or the one whose tutor taught the topic to him yesterday?  How do I address the one who did not do her homework in a way that signals to others that that’s not OK, bit that is also supportive?  What about the one whose mental health is a worry, and who was away last lesson?  When someone arrives late, do I help them, ignoring the others, or just let them flounder for a bit? And what’s the best way of crafting an activity to get at the difference between validity and truth? (one that allows access to the strugglers, but stretches the swiftest)?

And that’s only thinking about the what to actually do; it get’s even harder when you actually think about the sheer pace of teaching.  In a 2013 Slate article, teacher Ryan Fuller wrote as an engineer, I dealt with very complex design problems, but before I decided how to solve them, I had a chance to think, research, and reflect for hours, days, or even weeks. I also had many opportunities to consult colleagues for advice before making any decisions. As a teacher, I have seconds to decide how to solve several problems at once, for hours at a time, without any real break, and with no other adults in the room to support them. There are days of teaching that make a day in the office seem like a vacation. (As an ex-NASA engineer, he could title the article with authority – Teaching Isn’t Rocket Science. It’s Harder).

And then of course, there’s the human element of the job – which is actually the central part.  Ryan again: A teacher must simultaneously explain the content correctly, make the material interesting, ensure that students are staying on task and understanding the material, and be ready to deal with the curve balls that will be thrown at her every 15 seconds—without flinching—for five hours. If, for some reason, she is not able to inspire, educate, and relate to 30 students at once, she has to be ready to get them back on track, because no matter what students say or do to detract from the lesson, they want structure, they want to learn, and they want to be prepared for life.

When it’s going well, Ryan explain that he experience[s] more failure every five minutes of teaching than [he] experienced in an entire week as an engineer, and poignantly explains that a difficult moment in engineering involves a customer in a big meeting pointing out a design problem that I hadn’t considered. The customer’s concerns can be eased with a carefully crafted statement along the lines of, “You’re right. We’ll look into it.” A difficult moment in teaching involves a student—one who has a history of being bullied and having suicidal thoughts—telling me that she is pregnant 30 seconds before class starts. What carefully crafted statement will help her?

This blog is written, therefore, to all those teachers out there, who wrap it day in, day out, who are always there for their kids, who are more skilled than they themselves realise, and who, more than any technology, curriculum or policy, are what makes education magic for students around the world.

You can read more from Nick on his blog.