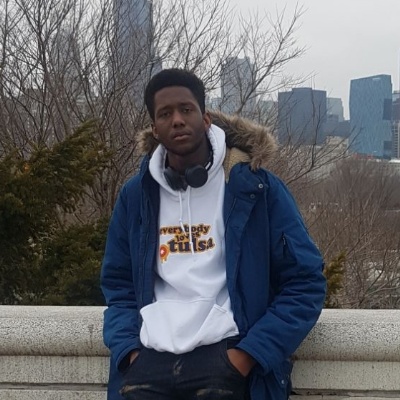 Hoody Abdul Ballah Kargbo (Sierra Leone, UWC Maastricht 2016-2018) was a recipient of a 2017 GoMakeADifference grant. Together with one of his classmates, Hoody ran "Inspiration for Her," an initiative to promote girls' education in his home country of Sierra Leone. In the piece below, he discusses his path to UWC, writing his IB Extended Essay on a sensitive and important topic relevant to his home country, and what inspires him to make a difference in the world:

"I attended UWC Maastricht from 2016 to 2018. It still feels like a dream, because five years ago the thought of studying abroad had never crossed my mind. That changed when I heard about the UWC movement from a friend. After researching, I found a link to the UWC Sierra Leone website and decided to apply. I submitted my application with zero hope of making it to the interview: I knew I was competing with the best students from the best schools across the country. However, to my surprise I got an email saying that I had been accepted for an interview.

Even then, I still did not believe I had any chance of getting a place at a United World College. This was mainly because out of 15 participants, ten were from Freetown (the capital city); the remaining five of us were from the provinces with just two of us from my city. At the end of it all, only three UWC places were available: and fortunately, after a series of tests, I emerged as one of three 2016 UWC Sierra Leone scholars.
While studying at UWC Maastricht in the Netherlands, I came to know my personal strengths and weaknesses. Being in a new environment and being surrounded by a different culture was a challenge, but it was also an opportunity for growth, developing qualities and skills that I might not have otherwise. UWC is a diverse environment, like a melting pot of beliefs, cultures, ideas etc., and thus each member of the community gets to learn about things from the perspective of others. This is part of why and how I made friends who became brothers.

During my tenure at UWC Maastricht, I decided to write my IB Extended Essay on the topic of female genital mutilation (FGM). This decision was influenced by my experience living in Sierra Leone, where FGM is a thorn in the flesh of girls’ empowerment and education. As an advocate for the rights of women and girls in Sierra Leone, the prevalence of FGM was a hindrance to my goal. As I explored this topic, I learned about the practice’s roots, its cultural, social and political groundings. Most importantly, however, from interviewing about 150 people I learned why the practice is so widespread despite all its negative effects. I continue to focus on health as a career, and am now pursuing a Bachelors of Science in Microbiology and Pre-Medical Sciences.

Every morning I wake up in order to be better than the person I was yesterday, or to do better than what I did yesterday. Every night I stay up thinking about how I can use what I have to positively impact the lives of others. I am constantly being inspired by my past and my future: I use my experiences from the past to make a better present and strive hard to reach the future I aspire to. Attending UWC has played a significant role in my life in that it gave me the opportunity to be educated, but it also gave me a form of education that is different from preconceived notions of education. UWC takes education beyond the classroom into other facets of life, which is incredibly useful for the future.

To all current UWC students, I firstly want to wish you all the best and success with the IB Diploma Programme. As Steve Jobs said, “the only way to do great work is to love what you do,” and in order to love what you do you first have to know what you love doing - so I encourage all UWC students to use the opportunities provided by UWC to explore the things you love doing. Bear in mind that success is not as complicated as it is usually perceived to be - it is all about “liking yourself, liking what you do and liking how you do it” (Maya Angelou)."