Reimagining Education in the Age of the Climate Crisis 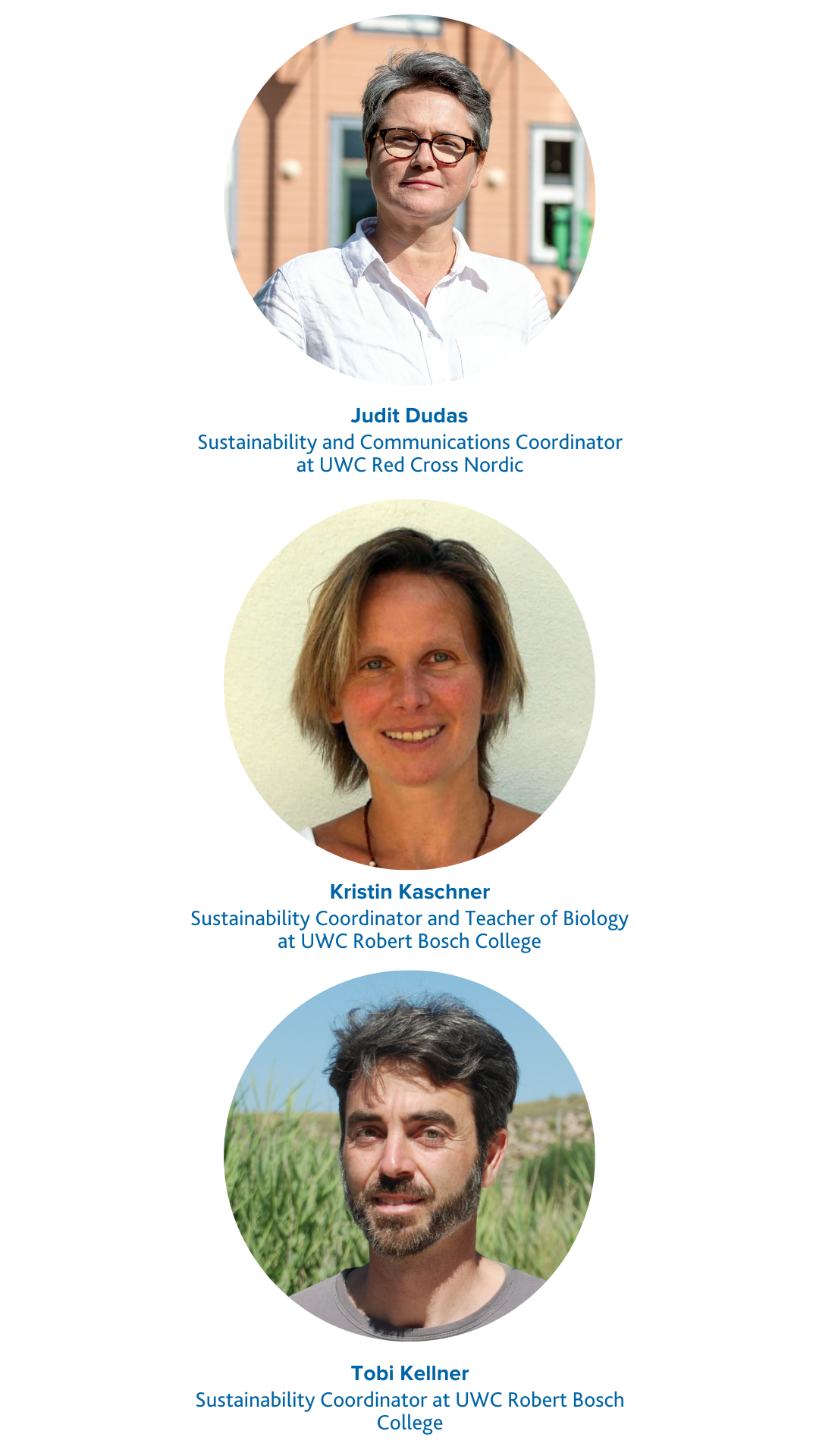 "UWC was built around a central question: what would a school look like that addresses the challenges our world is facing right now? Many of those challenges are different today than they were in 1962. Rather than focusing on building a more peaceful future simply by bringing together and educating young people from different nations and backgrounds, maybe we have to recalibrate our priorities towards an issue which, if we don’t solve, will make a peaceful future more and more of an impossibility" - Tobi Kellner, Sustainability Coordinator at UWC Robert Bosch College

This issue of prioritising the ‘sustainability’ part of UWC’s mission statement was at the crux of the following conversation between three sustainability coordinators at UWC Robert Bosch College and UWC Red Cross Nordic: Kristin Kaschner, Tobi Kellner and Judit Dudás.

The role of a UWC sustainability coordinator is a varied one: from initiating, organising and supporting sustainability initiatives together with students to monitoring on-campus energy use. Most UWC campuses have someone in place by now to coordinate these activities, though the amount of time they have to dedicate to these issues varies as well. At some school’s it is a full-time role, at others it forms part of the Environmental Systems Studies teacher’s role.

Kristin, Tobi and Judit all followed different paths towards their roles. Kristin, a renowned Zoologist and Marine Biologist with over 20 years of research experience, took on this role at UWC Robert Bosch College in the hope that it would help her move away from the “top-down approach” with which she had tried to influence policy changes in the field of sustainability for some time, to a “bottom-up approach: by trying to get young people from different parts of the world onboard with the sustainability movement while they are still young and open, so that they can go on to help fight climate change in their own home communities.”

Tobi had attended UWC Mahindra College himself, calling it a “transformative experience: whether that be due to the college itself or due to the experience of living in rural India at such a young age.” He had been working at the Centre for Alternative Technology in Wales when he came back into contact with UWC and heard about the potential opportunity to work as Sustainability Coordinator at the - then not yet open - UWC school in Germany: “I like education. I like sustainability. So I thought: why not give UWC a try again.” Tobi has now been in the role for 9 years.

Judit comes from a background in environmental management, having completed a masters in the subject before working for over a decade as an environmental consultant for various municipalities and industries. She has now been at UWC Red Cross Nordic for 10 years. Starting off as a house mentor, she was the first person to then take on (and create) the role of sustainability coordinator after initiating more sustainability related projects on campus. On her current role she says: “It’s inspiring, complex and challenging.”

The challenging aspects of all three coordinators roles come back in large part to ensuring that on a student and UWC movement-wide level, sustainability is seen as the top priority that it is - in words and in actions.

“It was great to see all 18 UWC schools recognise their role in tackling climate change and making their contributions to a net-zero economy this year in their 6 months to COP-26 statement. Now we need to implement those commitments on all 18 campuses. We need to bring climate change to the core of our academic programme. We need to expose students to alternative and more sustainable ways of living. We need more resources allocated to staff and initiatives at the UWC school and UWC International level so that these commitments can become reality. And we need a coordinated approach to set up structures that can and will make a difference. We are way past the point where we can look at this as a luxury – it’s a necessity!”

When we talked about the specific initiatives happening across the UWC movement to translate these words into action, the conversation was not short of ideas.

“We’re at an exciting point in time,” Tobi started. “There’s a lot of energy around this in the movement right now, with every campus having people in place who want to take more sustainable initiatives forward.”

Kristin continued: “I’ve heard about initiatives happening at UWC Mahindra College where students can only receive one Amazon package per term. Here on our campus we’ve explored new ways of implementing more sustainable consumer habits that students can then take with them into their post-UWC communities and lives. For example, we’ve created second hand clothing exchanges and are exploring ways to set up sustainable stores where students can buy in bulk.

Then there are things we could do to tackle the issue of flying students around the world - how about taking the longest flight time some students have to take to get to their school as a benchmark number of hours: any student who can reach their school by train within that time, has to take the train. Or we could limit flying by getting students to commit to staying on campus over the winter break.

Then there are so many ecological restoration initiatives happening on campuses, from restoring mangroves at UWC Thailand to tree planting at UWC Mahindra College. These are the kinds of projects that give students hope - and give them hands-on experience in ecological restoration. These initiatives are great to establish as single schools, but imagine how powerful the effect would be if these initiatives were coordinated and implemented on a UWC movement-wide level.”

To this end, Judit, Tobi and Kristin have all been involved in setting up a cross-UWC network of sustainability coordinators: “We’re at the early stages of that right now and there a challenges due to resource limitation but the first workshop we held was well-attended and we’re hoping to see this become a more impactful network in future.” 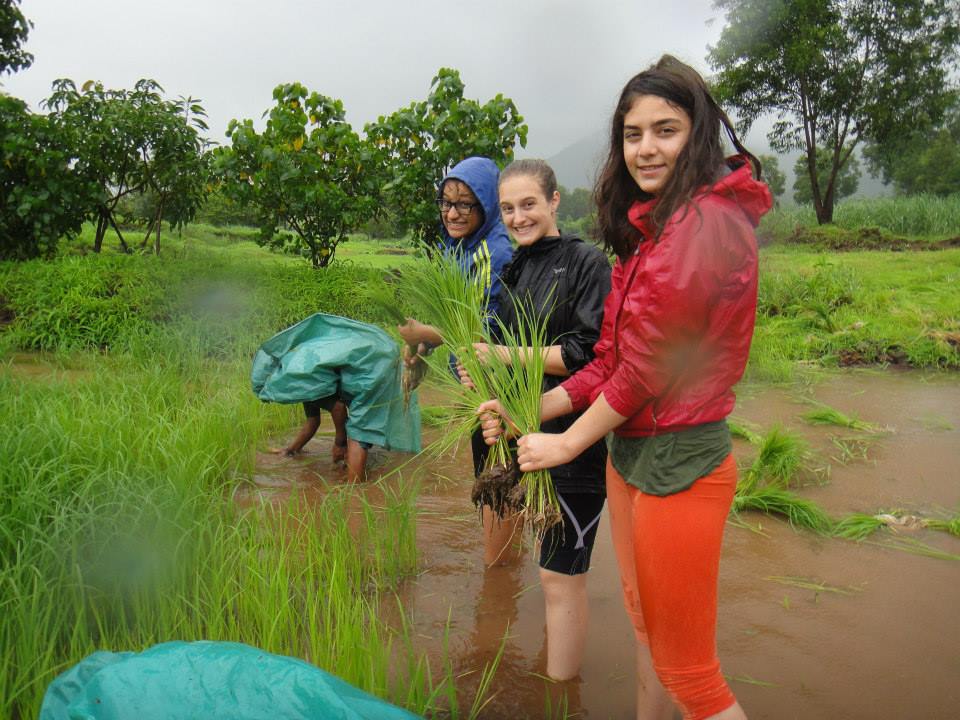 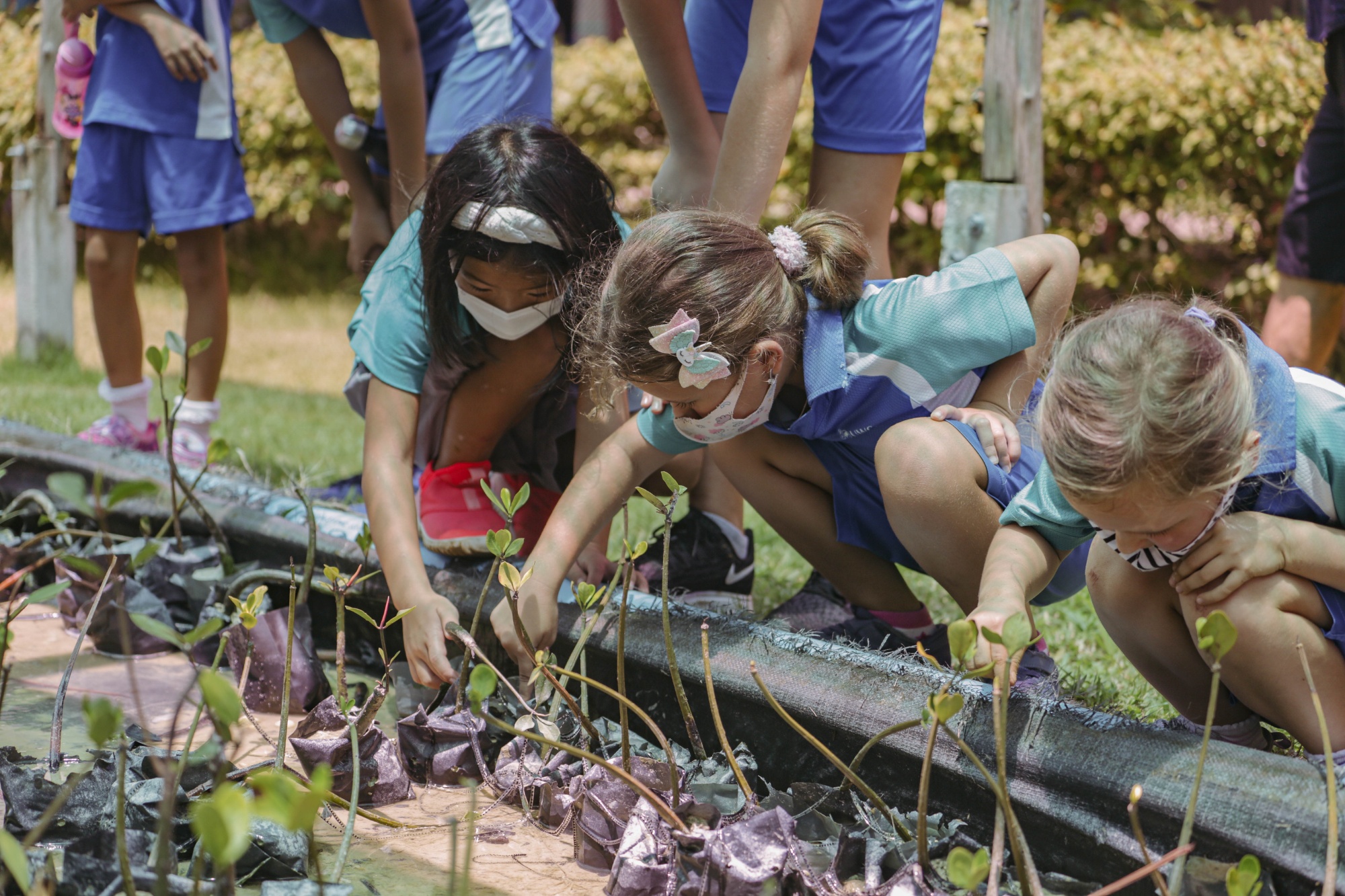 The topic of hope was also a key theme for the conversation. As Judit shared, “Climate change is becoming more scary for a lot of students. Climate anxiety is definitely a reality on campus now.” This was backed up by Kristin who shared that “I get students asking me if we can really still fix it. I think it's important to give them hope. To show them what is possible.”

They agreed however that this anxiety was not necessarily translated into action across the board. Among the reasons we discussed was the busyness of UWC life and the fact that humanitarian issues were often seen as more pressing by students. As Tobi pointed out, “there is a small number of ‘typical’ UWC subjects, like international relations, which a fairly large proportion of graduates go on to study, and the list hasn’t changed much since I was a student!  It is harder to get UWC students to consider going into some other very important fields such as sustainable agriculture or renewable energy. Then again, Kristin and I were encouraged to see that when we surveyed our alumni about the impact they felt their time at UWC had on their approach to sustainability, the majority said their time here had a significant impact, with many going on to become sustainability ambassadors at their universities.”

The fact that many students seem to prioritise other humanitarian issues over the climate while at UWC is also partially impacted by the diversity of backgrounds and experiences that make up the UWC student body. As Tobi explained, “For students arriving from war-torn countries, the question of - for example - whether we should be eating meat or not might not have the same urgency and is often seen as a ‘luxury problem’. But that’s what makes the way we communicate and educate young people on these issues so vital. If we don’t overcome the climate crisis, there will be more wars. The climate crisis impacts every other humanitarian issue. It should start to be treated as such.”

One source of hope for all three coordinators were the changes made across campuses over the last 2 years due to COVID-19. “We learned to have international meetings. We saw that it was possible for students to stay on campus over the winter break. We were able to invite global climate activists to speak to our students online. These same changes were seen as an impossibility just a year before. It has been a pertinent reminder that when you really consider something a priority, significant changes are possible. Both on a UWC and a world-wide level.”