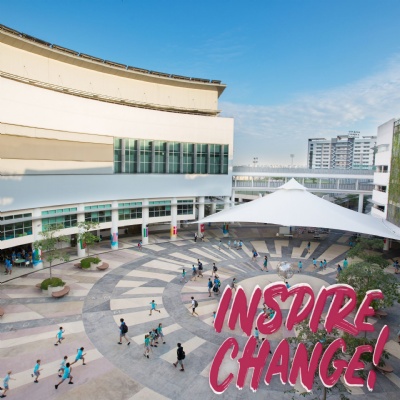 As a species, our obsession with change is a recent one.

Imagine, on UWC Day, if you stopped uniting peoples, nations and cultures for just for a moment or two and got into a time machine instead. Now this particular time machine is one seriously cool piece of kit. In it, you can travel up to 300,000 years into the future. So, you wave good-bye to your UWC buddies (who are of course too busy planting trees to notice you’ve gone), press the button and in a few seconds the dial reads 302018. With trembling hand, you open the door and to your amazement you look out and see …..

Well I’ve no idea what you’d see but I do know you’d be pretty disappointed if it looked exactly like the place you’d just left. Your expectation would be that the human species should have made some significant - and I mean significant - progress. Big pointy heads, clothes made out of shiny foil, world peace, underwater cities, and public execution for any teenager using the ghastly construction “I’m like” instead of  “I said ” …. Stuff that matters.

Now meet Mabel. Mabel is an early Neanderthal. 400,000 years ago she’s minding her own business at the entrance to a cave when suddenly that time machine swoops down and takes her 300,000 years into the future to meet her descendants. There’s a whoosh, a shudder and then the machine stops. Mabel - also with a trembling if ever so slightly hairier hand than you - pushes open the door. (It’s actually the first door she’s seen but Mabel’s a fast learner). And she relaxes. Home sweet home. She doesn’t even know she’s travelled in time. Still no crops, walls or villages after all those millennia. Actually, still no houses of any kind. The same old rhino meat for dinner, hacked off the bone by the same stone tools.  Mabel fits right in. If only she could figure out why everyone’s face had gone all weird.

In fact it’s worse than that. Humans, in some form or other, have been around for 3 million years, and for almost all of that time, there was very little intentional change. And even when, just a few thousand years ago, we planted crops and built walls around them which soon became the towns and cities we know today, the forces of conservatism were immense. From Pharaonic Egypt to Confucius in China, a whole raft of significant people were advocating for a steady state (both philosophically and geo-politically). Change was often deemed a very bad thing indeed.

But now, as a UWC Head, I am told to get out there and sew multiple fields with change. I’ve even been told to “Be The Change”. Why?  What has changed so much in the recent past that the word “change” can stand without qualification as something beneficial? And where’s Mabel when you need her?

But of course Mabel lived in the supposed-paradise of John Lennon’s song Imagine. Mabel knew no countries, no possessions, no religion, and maybe even nothing to kill or die for. Actually her steady state was neither hell nor paradise, but it was far less complex than ours. Mabel was not the victim of histories, dogmas, technologies and ideologies as we are. Her sparsely populated world, later to be ravaged by another species of the genus Homo, had not devised the cruel and terrible mechanisms of hate and control that preserve the power of the few, subject and marginalise the weak, bully and mock the outliers.

“Inspire Change” is right for UWC Day and right for our times. If the UWC Mission illuminates the country ahead, the seventeen United Nations Sustainable Development Goals - however flawed and sprawling some might think them - give us the opportunity to set off with compasses and simple maps to that aspirational state. On 21st September each year, our students have the chance to take stock of where they are as individuals and as a community on that journey. The axioms on which we have constructed this infuriating, wonderful movement of ours should be questioned: but if and when the answer comes back that intentional diversity is a good thing per se, that sustainable, peaceful existence in a world where social justice prevails is self-evidently offering a better future than that promised by posturing nationalists, isolationists and thugs, then we need to get on with things. And that’s what UWC Day is in two senses: a time to get on. We can celebrate together, make new friends and rejoice in our personal growth; yet all that is merely chimerical if on UWC Day we don’t remind ourselves that the Mission Statement is entirely about impact. The map is not the territory anymore than the the flare which illuminates the land is the territory.

As a Head I’m not sure that I inspire change. We might facilitate it by making time, encouraging initiatives, supporting colleagues and so forth, but do we provide the inspiration? Frankly, I think it is already bubbling over in the wells of the movement’s history, in peer on peer encounters, in the incredible work going on in our schools and through our alumni right now, and finally in the UN, UWC and other strategies that ensure we follow true north. In a world of fake news and limitless relativity, UWC Day is a marker: we stand for this.

I believe you can fulfil the UWC mission if you are running a global bank, or a suburban home with three children, or an NGO in sub-Saharan Africa, or even if you’re sitting silently atop a mountain planning your next novel. Your impact may be scattergun or surgical depending on your circumstances: but your ethical dispositions will always trump your job title. We can all of us be change-makers, and UWC Day should galvanise us all.

I’m not sure what Mabel would have thought if that time machine and gone forward just a little further and brought her to us. Neanderthal’s couldn’t write, and interestingly we’re not even sure if they could “speak” as we understand the word. I wonder if the aspirational state the UWC mission posits is actually closer to Mabel’s world than we might think. Anyway, on this UWC Day, the young people of my school will not be thinking like that: they’ll be in the present, looking to the future and seeking to make that proverbial difference. That’s as it should be.

One day, we’ll all be Mabels. Primitive ghosts of a long distant past. Let’s hope our foil-suited descendents can look back as fondly upon us I can upon her. Not because we lived in a state of innocence: just the opposite in fact. Because we called out injustice for what it is, and offered opportunities for our young people and alumni to start putting things right such as no other schools in the world can do.