Uniting the Phuket Community to Tackle the Island’s Water Crisis

The 2019 Every Drop Counts Campaign: Students at UWC Thailand cooperate across the community in the race against climate change.

As passionate advocates for sustainability at UWC Thailand, second years Pear from Thailand and Camilo from Spain, are focused on an action-oriented approach to tackling Climate Change:

“We noticed that many people, particularly within our community, are broadly aware of the issues surrounding climate change. But our focus as the Sustainability Committee is on creating a clear-cut plan to translate those concerns into action”, reflects Camilo.

The annual Songkran festival presented Camilo, Pear and the Sustainability Committee with a clear opportunity for action. Songkran is a celebration of the Thai New Year which is marked by splashing water at each other. As Pear points out though, the water fights that often ensue are a result of contemporary norms rather than Thai tradition. And as Phuket finds itself is in the grips of a water crisis, this custom has a damaging effect on the Island’s already dwindling water resources. Not celebrating it at all however, would mean missing out on an important date in the cultural calendar. As Camilo reflects, “Songkran was an interesting area to intervene in because it forced us to take into account the cultural impact that changes to the celebrations would undoubtedly have, rather than being able to approach the issue from a purely environmental standpoint.”

With these complexities in mind, the group set out 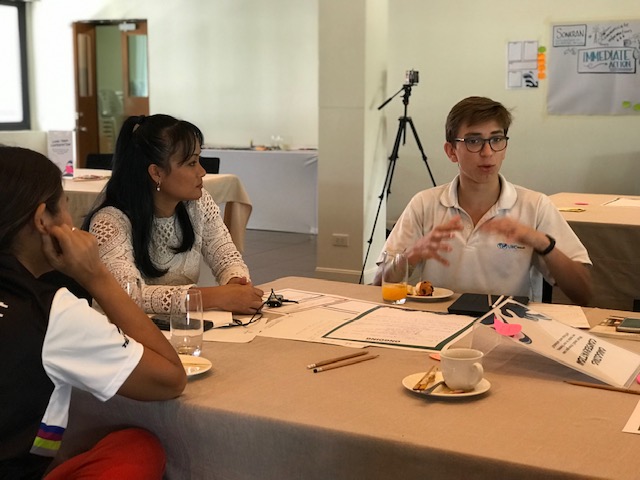 to organise an emergency working group involving local government and business representatives, as well as independent environment groups, to come up with a joint solution on limiting the amount of water wasted during Songkran, while still honouring the tradition and the needs of the wider community. The solutions were split into three sub-groups: immediate action, ongoing action and long-term action. The result was five concrete suggestions to raise awareness about water shortages among locals and tourists, and returning to the traditional palm watering ritual (which, as is usually the case with traditional practices, is also more sustainable). The suggestions were circulated across the island by The Phuket News and other news outlets.

Although for Camilo, these solutions did not match the grand ideas with which he had entered the discussions, the process taught him an important lesson:

“That day I really learned to listen. To understand what is needed by different interest groups and then come up with a plan, rather than going straight in with my big ideas. This meant having to make compromises, some of which limited our overall impact. But this process has, ironically, also made me more hopeful to make a change as it helped me rethink and develop my ideas to make them more viable. I now feel that I have more of the abilities and the skills needed to make a change. We at UWC all have this inner fire, this inner spark, where we believe we can change the world for the better, so it was really satisfying to see that our passion could actually drive us to put our ideas into action and that it can work.”

Moving forward, the UWC Thailand Sustainability Committee are working on a carbon footprint reduction plan for the school which they hope will result in both small and large scale changes to college practices and facilities.

For now, Pear and Camilo leave us with this parting message:

“Climate change is real. It is closer than we can imagine, it can move faster than we ever realised possible. It will affect every one of us. Some of us will come across its effects more than others. But every one of us has contributed to it. No single action could be blamed, but every single action will help in the race against it. It can move fast, but we can move faster. So let’s start by thinking that everything is possible. If we find out that something is technically not possible, keep modifying it and modifying it and eventually we will reach that point between dream and reality, where we will find the solution.”