Peacebuilding and Security Through a Gendered Lens

Callum Watson (UK, UWC Atlantic College 2001-2003) works as a project coordinator at DCAF - the Geneva Centre for Security Sector Governance. For our series of impact stories about UWCers and gender, Callum wrote about his experience working in the field of gender, peace and security and how his time at UWC shaped both his career and the person he is today.

"It’s funny how those navel-gazing conversations at 3:00am in the dayroom at UWC can sometimes predict the future. My co-year, Salina, predicted that I would work with women. Eight years later, I started working in the Gender and Security Division at DCAF. I should highlight, however, that these days we approach gender as a relational concept encompassing women and men as well as people who identify as both and neither; and while most of my colleagues, counterparts and partners are women, it’s no longer rare to see men working in this field too.

I love working in this field because the more people I encounter, the more it forces me to question my own assumptions and the logical foundations they’re based upon. Much of my work involves transformational education within the armed forces and with judges and prosecutors so that they are able to apply a gender perspective to their work. In addition, I conduct research aimed at challenging common assumptions, such as why there aren’t more women in peacekeeping (it’s not because there aren’t enough women in domestic security institutions), or what the root causes of domestic violence are (it’s neither drugs, stress, nor some biological tendency that makes men violent) and how it can affect men (the perpetrators are often but not always other men).

I draw a lot from the UWC ethos of giving people the tools to pursue their own curiosity, rather than simply broadcasting ‘facts’. Sharing analytical tools and trying to creating spaces where everyone can share their experiences and expertise equally is one strategy I use to try to address the (often valid) criticism that people in my field are applying a Western agenda. It’s worth highlighting that a lot of feminist thought originated from the anti-colonial movement, and European and North American academics are only now beginning to understand concepts developed in Latin America a century ago.

Some might question how I can do this work having never served in the armed forces or the judiciary. I also get ‘imposter syndrome’ where I ask myself whether I have a right to be there (as I did as a 16 year-old UWCer and again 15 years later at my UWC reunion). The rude awakening I had at UWC Atlantic College when I realised I wasn’t going to be among the best at all subjects as I had been at my previous school was probably a blessing. It taught me to help others where I can, but also to accept help where I need it. I could read up on the Arab-Israeli conflict, for example, but I’d learn a lot more by having the humility to ask questions to actual Arabs and Israelis, listening to them attentively and reflecting on their answers.

I now see that I was recruited to do this job because I’m able to create positive learning environments, motivate a sceptical learning audience and deal with resistance, largely thanks to my three-year experience working with over thirty teachers in Japanese state schools as an assistant language teacher on the JET programme (Working with the military is easy compared to working with sometimes quick-witted, sometimes lethargic teenagers.)

The credit for planting the seeds of 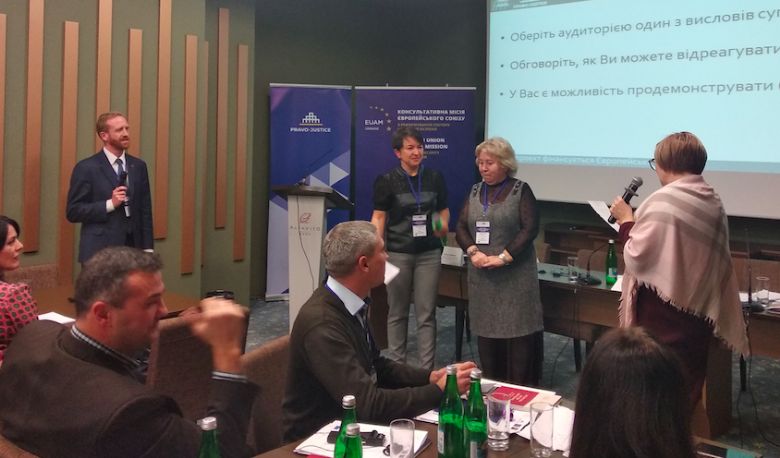 my interest in this topic goes to Nuala and Emily at UWC Atlantic College who wrote zines and spoke passionately about gender equality. Once someone points out that women are missing from a book or that a workplace is gender segregated, you can’t stop noticing how gender dynamics affect everything.

Then, at the London School of Economics, when Professor Kimberly Hutchings described how gender stereotypes made men vulnerable during the Srebrenica massacre during the Bosnian war while women, children and elderly men were given safe passage, I became curious to see what else gender analysis could teach us about international relations.

Later, and somewhat unexpectedly, I refined my gender analytical skills thanks to another inspiring academic, Professor Elisabeth Prügl at the Graduate Institute in Geneva. She guided me through an essay comparing the integration of women and of homosexuals in the armed forces, as well as a thesis where I conducted a gender analysis of the all-male Kennedy Administration’s decision-making process during the Cuban Missile Crisis. This feminist curiosity combined with a good understanding of literature on men and masculinities helped me stand out from the crowd in a competitive job market (although having met my future supervisors in yoga class helped.)

The greatest gift UWC probably gave me, however, was self-awareness - as a white, English-native speaking Brit comfortable with my sexual orientation - and the willingness to work collaboratively with others for the common good. My job is ultimately about recognising your own privilege and using it to the advantage of others when appropriate, while acknowledging when someone else has more skills, expertise or credibility and letting them take the lead while you learn from their example."