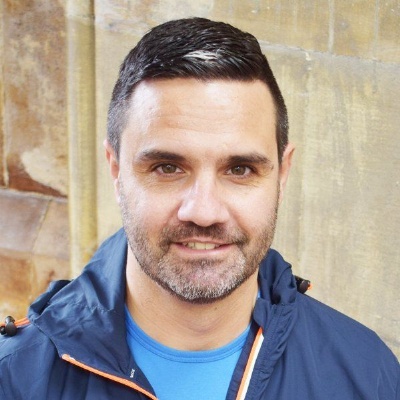 António Carvalho is an alum of the UWC Short Course in Lithuania from 1994, whose early passion for Geography led him to obtain a Honours Degree in Geography and Town Planning from the Universidade Nova de Lisboa, prior to completing a PGCE in Secondary Geography from UCL.

Since moving the the UK in 2005, António has been working in Education, both as an academic and pastoral leader in inner-city schools and as a teacher at UWC Atlantic College in Wales. He has also volunteered extensively with the UWC movement, as a member of the UWC Portugal National Committee and more recently supporting UWC National Committees in Belgium, Malta and Northern Ireland. A passionate advocate of UWC Short Courses, he has lead several (and supported the roll-out of many other) UWC Short Courses (such as the 2018 UWC Malta Short Course).

In 1994 when offered the opportunity to spend three weeks in Lithuania on a UWC Short Course, “When East Meets West,” António says he didn’t hesitate to accept. “I was extremely excited about visiting what sounded like a very distant and ‘exotic’ country, but, above all, I was ecstatic with the fact I would meet other young people from all over Europe.” The UWC Portugal National Committee had nominated António to attend the programme, and he says that the experience was far better than he could have imagined. “Twenty-five years on, I still regard it as one of the most extraordinary experiences I’ve ever had. I can’t sufficiently thank those who made this possible. I discovered a whole new world, and I decided I would do anything and everything I could to make the best out of it.”

Having already decided that he was going to study Geography, the intense, transformational experience of a UWC Short Course motivated António to look at his undergraduate studies from a more international perspective. He says that he soon started making connections between different places, and, more importantly, understand the interdependence between them. “When I was offered a secondment to the United Nations in Timor-Leste, I didn’t think twice about dropping out of a Masters degree I had recently started, and throw myself into another adventure." António was 25 when he took the post, and he says it almost felt like stage two of his UWC experience. Working with professionals from all over the world, living in a small Timorese neighbourhood in Dili, António tried his best “not to be another ‘white man’ trying to make change happen in a developing country. Instead, I made sure I spent time learning about this beautiful country and its incredible people and culture. I was extremely lucky my job involved travelling around the country, as this enabled me to have a far more enriching experience than if I had just being stuck in an office behind a computer writing endless reports. Change happened in the end, but mostly within me.”

When asked why he has dedicated so much time to running and supporting UWC Short Courses, António responds that he wants to share this life-changing experience with as diverse a group of young people as possible, hoping it would be as impactful for them as it was for him. “Over the last 2-3 years, I have seen so many 16-17 year olds feeling empowered through UWC Short Courses, and witnessed growth and learning that continues long after their time on the courses themselves. I’m in regular contact with some of our UWC Short Course alums, and they are doing amazing things for themselves and for their communities.”

UWC Short Courses and Summer Programmes are for those young people who want to live an intensive and transformational experience at their own pace, says António. “If you allow yourself to fully engage, you will be pushed out of your comfort zone and real learning (whatever that means for the individual) will happen.”