Aoife and Jule (UWC Maastricht, 2014-2016) were recently recognised by the Basel Peace Office for their work on climate justice, and more specifically for their work on a campaign called World's Youth for Climate Justice (WYCJ). Their aim is to put human rights at the heart of the climate crisis by bringing the issue to the world's highest court - the International Court of Justice (ICJ) in The Hague. We spoke to Aoife and Jule about the campaign, their approaches to climate activism and how their UWC education helped shape the paths that they followed.

The World’s Youth for Climate Justice campaign was kickstarted by a group of students from the Pacific Islands who were already seeing firsthand the catastrophic effects of climate change on their home countries and communities. Having learnt about the efforts of the Pacific Island state Palau, which sought an Advisory Option on climate change at the International Court of Justice (ICJ) 10 years ago without avail, the group set out to try again. This time with greater involvement from other youth climate activists and groups around the world and with a greater focus on human rights and on state obligations to protect people from the impacts of climate change.

Aoife was introduced to the group while attending COP25 in Madrid back in 2019 in her role as the Dutch UN Youth Representative for Sustainable Development. Not long after, Jule and Aoife joined the cause to develop and kickstart a European ‘branch’ of the campaign in 2020. First by getting people from their own communities involved, by organising a summer course at Leiden University for example.

“We now have a number of regional campaigns going on in different parts of the world - the Pacific Islands, the Caribbean, Germany, the Netherlands, Australia, the Philippines, in the US and more - and we’re all pressuring our own governments to vote in favour of this resolution to bring human rights and climate change to the ICJ. We hope we will continue to grow to include more parts of the world.”

In order for the ICJ to consider this legal question, a majority of UN member states need to vote in its favour.

“Our hope is that once this issue reaches the ICJ, they will interpret the existing state obligations - such as the right to food, the right to clean water, the right to an education - in a way that will motivate states to take their commitments, that they undertook as part of the Paris Agreement, seriously. For example, that states have the obligation to continue ensuring that children have a right to education despite the effects of climate change. As the world’s highest court, they carry the most authority on legal opinion. We believe this could be a big next step in developing and shaping international law around climate change and in bridging the gap between human rights and climate change.”

The group has already secured support from the UN High Commissioner for Human Rights, alongside the UN Special Rapporteur on Human Rights and the Environment - among other academics and officials. But they expressed frustration that it was so far proving more difficult to garner support from governments, as Aoife shared: “My main frustration has been that over the last 1 and a half years that we’ve been working on this project, a lot of countries have begun to increasingly understand the importance of considering the impacts of climate change on human rights, but it is still so difficult to encourage countries to take the necessary step forward to support the Advisory Opinion on climate change at the ICJ. So I guess my frustrations boil down to countries doing the talking but not walking the walk.”

On the flipside, it is the optimism and perseverance they observe among their colleagues in the Pacific and in the Caribbean that keeps them going: “They don’t have the privilege to give up on this project if it gets hard because the situation they are in is so critical. This international legal remedy is one of their big hopes to bring about a brighter future for the next generations. The way they continue to be so optimistic as we fight for this very ambitious goal, that at times can feel so far away, reminds us everyday why we need to keep fighting with them.” 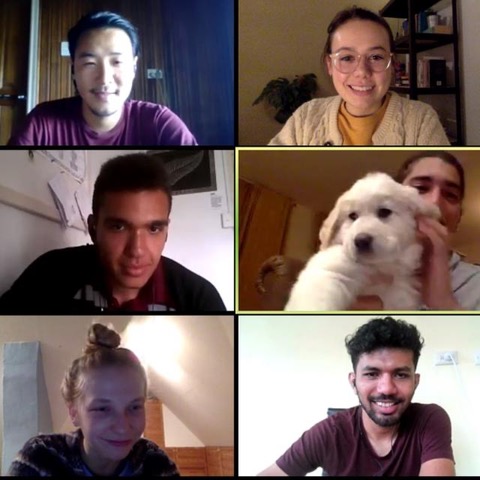 Looking back at how Aoife and Jule ended up where they are today, they each shared their individual journeys towards climate activism:

"My journey started while at UWC when Jule, myself and another friend decided to organise a Youth Environmental Sustainability conference at school, which we timed to coincide with the weekend of the Paris Agreement. We organised workshops and lectures around climate change and the Paris Agreement and we planted a tree in front of the school. For me this was a real starting point, organising this conference, being around so many people at UWC who cared so much and also seeing it appear more and more in the mainstream media - it was a trigger point that led me to understand how crucial and how enormous the climate crisis was and to take the decision to continue working on it."

"For me, climate change had been an issue I had been involved in since I was quite young, having been involved in an environmental initiative called ‘Plant-for-the-Planet’ since 2009. But what I found difficult back then was always feeling like I was the only one in my hometown who cared. So that’s why UWC seemed like such a great next step - being full of all these people who also wanted to make a difference and who were already taking action in their own communities."

The vivacity and variety of causes that their fellow students were involved with at UWC was also something that could at times be overwhelming, as Aoife explained: “There were so many issues to think about that it could sometimes feel like you needed to have an opinion on everything.” When it came to developing their approach to climate activism, Jule says this multiplicity of issues being discussed on campus also helped her develop a more intersectional approach: “I’m very grateful that UWC opened up my understanding of intersectionality. It wasn’t their cause vs my cause, climate change affected all the different issues that were being discussed, and vice versa. This meant that we could collaborate and learn from each other.”

She also admits though that her approach to climate activism as a student was not as inclusive or far-reaching as it should have been: “We focused a lot on environmental sustainability which at 16 seemed like the most obvious thing to do. But looking back now, we had a very white- and euro-centric perspective on what the environmental movement looked like and I don’t think we did a very good job of challenging this global narrative that was already very full of white environmentalists.”

Explaining how their exploration of intersectionality and climate justice fed into the work they do today with the WYCJ, Aoife added: “Learning about how climate change impacts inequalities, access to food, conflicts and more, just shows how its an issue that transcends so many other issues. That is why our campaign’s focus on human rights is so vital, in order to try and show to people that tackling climate change is not an economic or political choice - it’s a human necessity.”

Today, Aoife and Jule are both law students, having first tried out politics related degrees due to their ambition to become “full time changemakers - whatever that means”, they laughed. “It sounds a bit cheesy but I think right now we’re actually using our law education combined with the activist heart and determination we developed at UWC to really make a difference. It feels good to be putting that education we were lucky enough to receive into practice.”