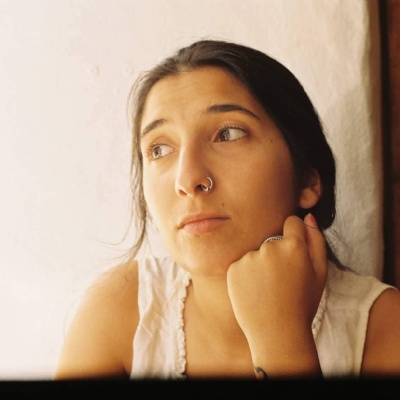 Inês Colaço Fernandes grew up in a small town in Portugal near the ocean. Though she loves her hometown, she says that living there sparked her desire to branch out and explore educational and cultural opportunities beyond it - which is what eventually brought her to UWC.

In 2014, Inês attended a UWC Short Course in Mostar. During two “amazing” weeks, she met people from all over the world, and took part in thoughtful activities exploring a variety of different topics. Inês was impressed with the open and honest dialogue which took place during the course, especially around issues of gender identity. She began thinking about “traditional” gender roles and their impact, and has been exploring feminism, gender studies and queer theory ever since. Though the UWC Short Course Inês participated in wasn’t centred around the topic of gender, she describes it as the first time she started questioning the status quo and her own assumptions about the topic. “It made me uncomfortable in a way, so it made me search, and then it made me question some more – and I’m still questioning, and I’m still searching, and if it all goes well, I will always be,” she says. “I think you have to constantly defy your own thoughts, and you cannot let what you think you know get in the way of asking new questions and finding new answers, even if it makes you completely change your mind.”

Inês, who now lives in Lisbon, will graduate with a bachelor’s degree in International Relations in 2019. Since her first day of university, she has tried to become engaged within the community: as President of the International Relations Students’ Union, I’m currently as a member of the university’s newly-founded environmental group and as the Head of Communications for the HeForShe group on campus. HeForShe is a United Nations solidarity campaign for gender equality, which seeks to actively involve men as agents of change. “You cannot modify the status quo if you exclude half of the people who are involved in it from the dialogue,” says Inês. Her campus HeForShe group organises conferences and informal conversations with students to raise awareness about feminism, gender violence, toxic masculinity, gender roles and more. In November of 2018, Inês took part as a trainer in a two-week Erasmus+ course called “Let’s Talk About It: Sexuality, Gender and Arts.” Along with another trainer, she led non-formal educational activities for educators and young leaders from several countries. This year, Inês hopes to run yet another project exploring these themes, but for a younger group of participants.

SInce graduating from the UWC Short Course, Inês has also been working as a volunteer with the Portuguese UWC National Committee. She takes part in the candidate selection process and helps the committee throughout the year, serving as the committee’s Bursar in 2019. “Our amazing team, which is made from hard-working volunteers spread around the globe, is always willing to help even if they are drowning in work,” she says. Inês especially thanks former UWC Portugal’s Board President, Clara Cruz, for her support: “She has encouraged me to stay engaged, and has helped me forget my insecurity in being “just” a short course alum.” UWC plays a big role in Inês’ life: “I love to be active in UWC Portugal. Every time I meet with UWCers, I leave more inspired, more energized, more hopeful.”

When it comes to pursuing her education further, Inês says that a Master’s degree in Gender Studies is on the horizon for her. Before that, she intends to keep exploring the topic on her own time, while helping at the Interdisciplinary Centre for Gender Studies (CIEG) at the University of Lisbon. Through this experience, she hopes to deepen her understanding of the work of the CIEG, while also having the chance to actively contribute to it. Eventually, Inês hopes to combine her interests in gender, education and humanitarian action through meaningful work where these three areas intersect.

When asked to describe the UWC movement and its impact, particularly through UWC Short Courses, Inês had this to say: “You must know that UWC is so much more than two years in a college (I never did that - and I feel just as much of a UWCer as anyone else). I have yet to find a group of people quite like this one - there is a very special energy you can see when UWCers get together. But you must also remember that UWC does not make a person this way – it’s already in you, it just enhances it. There are great, innovative, world-changers people out there, everywhere, that never came in contact with UWC and that are just as valid and worthy as you; and those  of us who are given the gift of a UWC experience should do everything we can to spread the UWC mission widely, and encourage other UWCers and non-UWCers alike to make a difference.”