Hopebound: UWC Sisters Set Out To Support Their Community During Lockdown 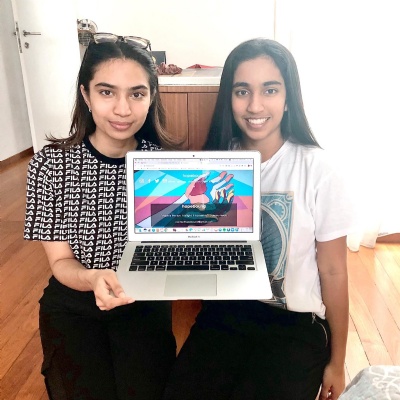 “UWC instills a sense of empathy into all its students, it is as though when you see someone or a group of people in need of help, you are automatically drawn to do whatever you can to help them.”

Earlier this year, Ayesha (UWC South East Asia, 2011-2021) and Nishka (UWC South East Asia, 2013 - 2017),  like many of us, found themselves in one such position: “We could see that so many people were struggling, and at the same time we were sitting at home feeling helpless. The combination of those factors propelled us to really think hard about what we could do - from our bedrooms in Singapore - to help our community.”

So the sisters got planning. Their idea: a website that collated resources for those people worst affected by the pandemic.

Their strategy was to be guided by the needs that they saw in their community. They first made a list of all the groups of people in Singapore who may be impacted more severely as a result of the circuit breaker (lockdown) and then they tried to focus on those who were at risk of being overlooked. They started off with four main groups: young people, victims of domestic abuse, unemployed people (or those who became unemployed), and senior citizens, and are now also looking to expand their services to other groups, such as single parents.

“At the start, we initially aimed to link these groups of people with existing resources that they may not be aware of - however, as we developed our website, we also launched two programmes. One is a mentorship programme for those who have recently lost their jobs and one is a psychological support programme for anyone in need of mental health assistance. We’re currently working especially hard on making the latter programme more visible to the public - it's such an overlooked issue that needs more awareness and in Singapore, it is very difficult to find this type of help free of charge.”

The way both programmes work is that Ayesha and Nishka built up a network of people who would be willing to offer support in their area of expertise for free. For the job mentorship scheme, the team reached out to people across a range of industries and before they knew it they had more than 40 mentors on board offering help to edit resumes and cover letters, and providing job interview practice - all free of charge and anonymously, “as being jobless can be sensitive for some”, Ayesha comments. Similarly, the mental health programme connects people who need it with participating psychologists at no cost.

Challenges and obstacles have, of course, also been part of the ride towards Hopebound’s current place, from learning how to design a website for the first time to balancing Hopebound’s work with Ayesha’s UWC deadlines and Nishka’s University work:

“Overcoming these challenges was difficult, however, whenever we reminded ourselves about why we started this initiative - they didn’t seem like challenges anymore. I would often compare these challenges to the hardships faced by the people we are trying to help and it made it all worth it. Whether it was doing hours of research to figure out how to tweak a certain part of the website, or sleeping just a couple hours at night - it would be worth it if the platform helped even just one person.”

And then two big turn-around moments came: “The first one was the moment we launched the website and made it live - this was an incredible moment because we had spent so much time designing it in just the short period of 2 and a half weeks. Secondly, the day  our article got published in the Straits Times was definitely a standout moment because that day we were overwhelmed with responses from both members of the public in need and those who wanted to volunteer to help. It was actually the day we began thinking about our mental well-being programme as we had so many volunteer psychologists reach out to us.”

Looking back on the last few months, Ayesha reflects:

“I was always told that if I wanted to make a difference, I could - but I found this difficult to believe because I am just a 17 year old in Singapore. However, this attitude has completely changed for me now - I have realised that as individuals, we are capable of making a huge amount of change in the communities we live in.”