An Interview with Alumna Mandu Reid: Leader of the UK Women’s Equality Party

Mandu Reid (Waterford Kamhlaba UWC of Southern Africa, 1992-1996) has been the leader of the UK Women’s Equality Party (WEP) since 2019, making her the first person of colour to lead a national political party in British history. The formative years she spent at Waterford coincided with the twilight years of the apartheid regime, with the racial injustices she witnessed then forming the focus of her early years in activism. It was only when she moved into the world of work herself that she also became awakened to the continuous need to fight for gender equality - a cause that she has been campaigning for ever since across different channels of change, from the world of Nonprofits to the political arena. We were lucky enough to speak to Mandu about her journey towards feminism and enacting meaningful change in a way that played to her own strengths, alongside the impact that her UWC education had on what she does now and how she does it.

After leaving UWC, Mandu describes herself as being “fairly typical” amongst her UWC peers in the path she sought to follow:

“I really revered the idea of UN type jobs and the prospect of a career working in international, multilateral corporations. That is what I believed to be the professional pinnacle of the ideas we had been taught. I thought it was there that I would be able to make the biggest difference in the world and live out my UWC ideals.”

Having since changed her mind about this particular trajectory, Mandu reflected on what she now sees as the most meaningful way to make change happen:

“I don’t think there is a single answer to that question. I think it’s important as a young person at the start of your career to try and be a little bit promiscuous in terms of the work you do and your professional experiences. That will teach you where your strengths as an individual lie. When you marry up people to projects that allow them to make the best use of their strengths - that’s when the magic happens and that’s when big change can take place. I think I was incorrect as a young person in thinking that a UN type institution was matched to my abilities and strengths. Those institutions are big bureaucracies and I am not energised, inspired or at my most effective in that context.”

It is this realisation about where her true strengths lie that helped to propel Mandu forward into her current position as the leader of the Women's Equality Party: a small, insurgent political party that seeks to challenge established systems. “In a way that is the opposite of the career I had originally wanted for myself. My strengths as an individual are what make me well suited to this kind of work, which are the same qualities that would make me unsuited to working in the UN type environments I had initially envisioned myself thriving in and which other people do thrive in.”

Mandu’s final advice to the freshly graduated Class of 2021 therefore?

“Have a broad, open mind, be prepared to learn what works for you and then try to match that to where you work, what you do and where you put your energy into. This was a lesson I only learnt much later on in my personal journey.”

Fast-forward to today and Mandu is the leader of the Women’s Equality Party in the UK. Although from looking at Mandu’s CV the issue of women’s empowerment jumps out front and centre across many of her professional endeavours, with Mandu also having founded The Cup Effect (an NGO and advocacy organisation with the aim of making period poverty history), Mandu admits she was actually a late developer when it came to her own feminist consciousness:

“I only really identified myself as a feminist from about the age of 26 onwards. Having been educated at Waterford and what was then Swaziland in the twilight years of the apartheid regime, what that exposed me to was racial injustice. That was what was front of mind for me. I saw it in vivid technicolour. Being so exposed to that and focused on that actually obscured the fight for gender justice. It wasn’t particularly visible to me at the time and I was one of those people - I'm almost ashamed to admit - who thought that the work had already been done in that area. I saw feminism as a bad F-word. It was not something I felt comfortable identifying with and I was not convinced it was needed.” 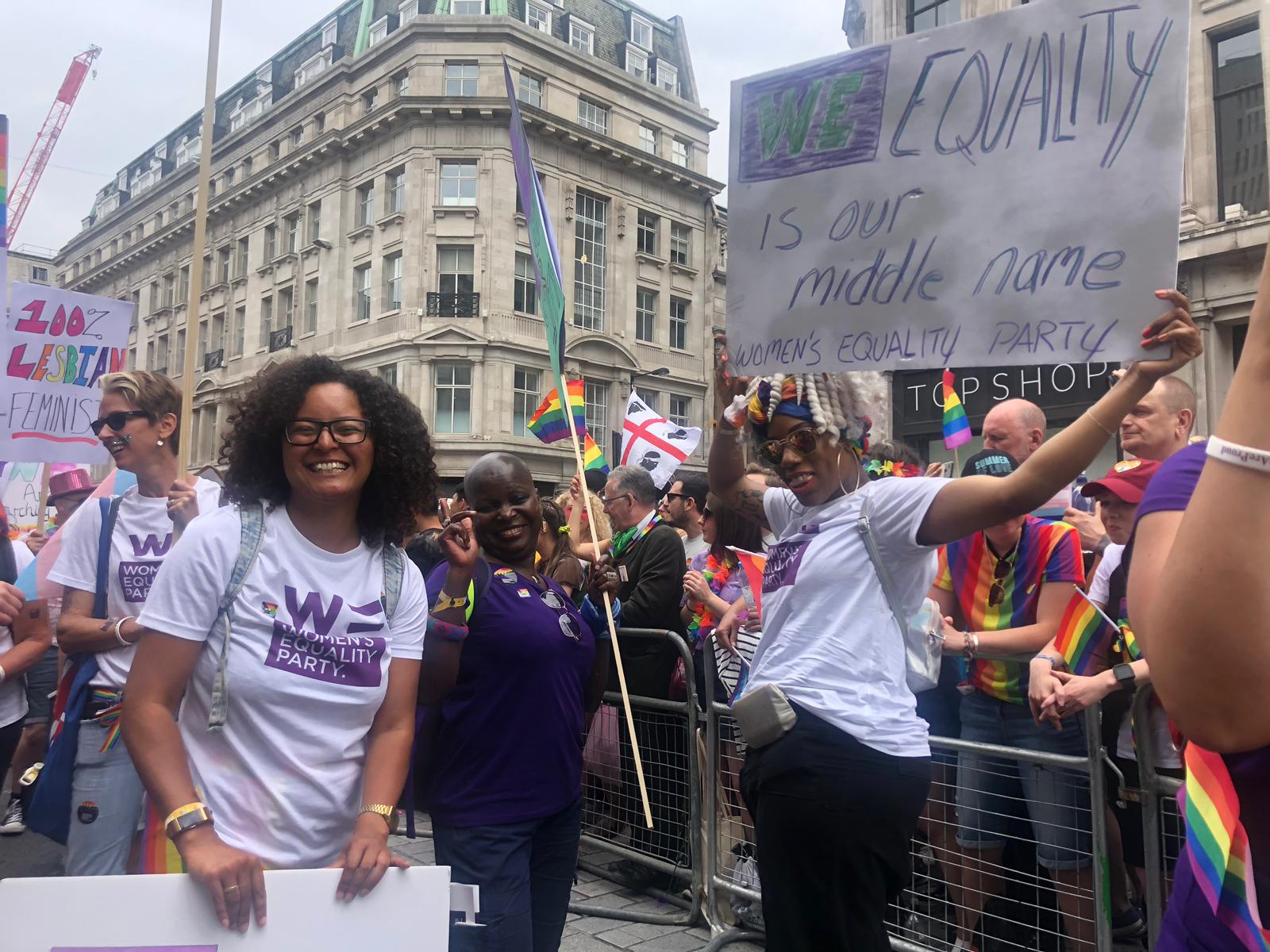 “Lots of things conspired to help me see that if you’re into social justice, gender equality is a massive unresolved issue. Sexual harassment in the workplace, men and women having different prospects in the workplace, male violence against women and girls - these are the issues I began to observe, witness and become much more aware of. Then there was also a more personal reckoning in my mid-thirties when I faced an unplanned pregnancy. In that situation neither I nor the man could imagine a situation where I would not be the main or sole-caregiver of the child - with all the career constraints and compromises that would accompany that outcome - even though I was the one in the more advanced stage of my career with the higher salary. So I had an abortion. What I learned through that was that in a very structural way, the cards are heavily stacked against women in our society. And we just accept and tolerate that.”

The Women’s Equality Party became a practical channel where Mandu saw the possibility for the kind of structural and systemic change necessary to resolve these issues:

“The Women’s Equality Party was founded six years ago and one of our policies is around equal parenting and care-giving, consisting of proper shared parental leave and free universal childcare. If the Women’s Equality Party policies had been adopted in the UK when I was pregnant, I could have made a different choice. It would have been possible for me to pursue my career, to fulfil my plans and potential, and I could have had a child and made it work - whilst also staying afloat financially and in terms of my mental health. None of the mainstream political parties in the UK and in most other countries are nearly ambitious enough on this issue. And I was not ok with that. I realised I needed to throw my passion, my voice, my energy and everything I had learned throughout my career so far to push for change in the political arena. Because you can run projects and NGOs looking to help fix specific issues, but to enact the level of change that is needed to address the structural reasons for inequalities between men and women, you need to influence the political system itself. So, I joined the party and a couple of years later found myself as the leader.”

Speaking more broadly about the ways in which the Women’s Equality Party ‘does politics’ - it is here too that Mandu is leading an innovative new way of conducting politics in an effort to challenge the tide of polarisation that has gripped many political systems around the world:

“We call it practising political polyamory. For example, you can be an official card-carrying member of the WEP, while also being a member of any other party. This was a subversive decision for us to attempt to break down traditional party tribalism, and it means our party is being influenced and shaped by members who carry completely different perspectives.

Another way we are trying to tackle the ever-increasing polarisation that we see is by introducing deliberative approaches to resolving complex problems. One of the most divisive debates feminism is currently wrestling with is the tension between those advocating for trans rights and those who believe these are in conflict with sex-based rights. One of the ways we have tried to address this division is by using the citizen’s assembly model as they did in Ireland ahead of the abortion referendum to try and create a space where you are not there to win an argument, you are there to deepen your empathy by listening to and engaging with those who have a very different viewpoint to your own. That’s how you change society. The magic doesn’t happen when you only speak to those who affirm your views or by using a sledgehammer to try and bring people round, the magic happens when people with different viewpoints are able to open their minds, to actively listen and to consider things from the perspective of those who may see things differently to them. That is how you can create the conditions for collaboration. And we need more of that discipline in politics and in our society more broadly. We’re trying to set an example in this area to change the way contentious issues are discussed, dealt with, and ultimately resolved, by offering a counterweight to the division and polarisation that infects so much of 21st century politics”

This emphasis that Mandu and the Women’s Equality Party places on collaboration over polarisation is strongly driven, according to Mandu, by her experiences as a UWC student:

“Those ideals and principles come very naturally to me. UWC is not perfect, nonetheless, its professed ideals are the same as the ones I have tried to infuse into the way our small insurgent political party operates. I have a seemingly contradictory  combination of traits that I think my UWC education is quite responsible for - I am very curious and open-minded, yet I am also very opinionated when it comes to the principles and the value system I believe in. I have also always been able and willing to embrace complexity, something which UWC helped instil in me. UWC is a complex organisation. We had the children of Presidents at our school alongside people whose fathers might have been imprisoned by said President. That melting pot and that experience shaped the way I analyse problems, the way I look for solutions and my willingness to really explore. I’m not sure I would have that combination of instincts if I had spent my formative years in a completely different environment.”

Ending our conversation on the wider role that education must play in helping to bring about the systemic change needed to address gender inequalities worldwide, Mandu reflected how schools and - more specifically - UWC schools and colleges must contribute to this effort:

“Many of the policies we are campaigning for do not only require legislative change, they require a shift in norms. That’s where education comes in most prominently. We need to teach boys and girls about the norms that underpin certain changes from a young age, such as around an affirmative consent law we’re currently campaigning for. We also need to be aware of the biases that are baked into our current education system, such as why it is that more boys choose to study STEM subjects than girls. Education has an absolutely critical role in shaping the attitudes, behaviours and norms that underpin every society. UWC in particular has no excuse to not have that kind of discipline. UWC should be at the cutting edge of anything that relates to social justice. So I would enthusiastically encourage UWC to engage in an ongoing process of self-reflection, to continue evolving the ways in which it educates students so that UWC can be the best possible version of itself.”