In Celebration of Phil Geier 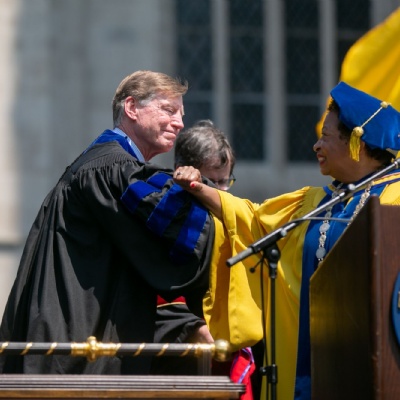 Phil Geier, the international educator, Executive Director of the Davis-UWC Scholars Program and former Head of UWC-USA, has been awarded an honorary doctorate at Trinity College in recognition of his vision and profound influence in the fields of education and international understanding.

Phil Geier’s distinguished career in education has involved university teaching and leadership positions at foundations, non-profits, and educational institutions - including serving as President of UWC-USA from 1993 to 2005. Since then Phil is best known to the UWC community for his master-minding as executive director of the Davis-UWC Scholars Program. Co-founded in 2000 together with UWC Patron, Shelby Davis, the Program provides scholarship support to any UWC graduate who has been offered a place to study at 99 selected US partner colleges and universities, which in turn match the Program’s contribution. It has so far provided scholarships to 10,424 UWC alumni from over 160 countries and is the world’s largest privately funded international scholarship programme for undergraduates. It is lauded time and again by its partner universities - including Trinity College - for helping US campuses to become more globally minded and engaged. From our perspective at UWC, we will never be able to fully express our gratitude to Phil and to Shelby for providing UWC alumni with this vital stepping stone as they go out into the world and prepare to change it for the better.

In awarding Phil with this honorary doctorate, Trinity also recognised the Projects for Peace initiative created by Phil in 2007 and generously funded by the late Kathryn W. Davis, mother of Shelby Davis. Founded under Kathryn’s wish to “bring about a mindset of preparing for peace, instead of preparing for war”, the initiative has so far provided over 1,500 winning projects in nearly 150 countries around the world with $10,000 grants  - with many UWC alumni among them.

Beyond these initiatives which contributed to Phil being awarded this honor by Trinity College, at UWC we have our own (very long) list of initiatives and programmes created by Phil and Shelby for which we are immensely grateful. Starting in the late 1990s, Phil and Shelby have been supporting scholarships for 50 US students per year to attend UWC schools and colleges. In addition, Phil and Shelby in 2015 launched the Davis-UWC IMPACT Challenge, providing USD 1 million in match funding to each of the then 17 UWC schools and colleges. In 2018, they launched the Davis-UWC Dare to Dream Programme supporting 100 UWC scholarships per year with a total of USD 5 million. Both of these initiatives have been instrumental in enabling even more students - regardless of their background and circumstance - to access a UWC education through scholarships.

Today, we congratulate Phil for being awarded this much-deserved honorary doctorate at Trinity College. We agree wholeheartedly with the words shared in the citation with which Trinity College presented Phil with his degree of Doctor of Humane Letters:

"Your belief that all of us must build cross-cultural skills and attitudes of mutual respect—here in the United States and around the world—has inspired countless international learning experiences. Your commitment to fostering citizen diplomacy and international understanding through education serves as a model to us all. And your vision, which has helped to create a network of future leaders around the world, is legendary."