UWC Alum At The Helm of Fridays For Future 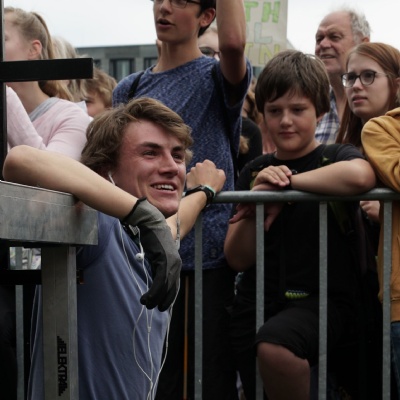 Moritz Kalis (UWC Robert Bosch College, 2015-2017) on his involvement in the Fridays For Future movement and what we as a community can do in the race against climate change. Moritz has been involved with the Fridays For Future demonstrations in Berlin since January of this year. Although he traces his first significant engagement with the climate crisis back to his time at UWC, it is only now that he has graduated and found his place within the FFF movement that he finally feels he is able to live up to the sense of responsibility that UWC taught him.

When he arrived at his first demonstration back in January, he was immediately impressed by the 10,000 strong student crowd that greeted him:

“It was beyond all expectations! I had some time to spare, so I offered to help in any way - and a week later I joined the core organising crew in Berlin. The movement grew exponentially, and so did the work - I quickly started helping out with everything I could to keep the weekly strikes in Berlin going, trying to allow our public representatives to focus on other things than the logistics. My current focus is organising the big demonstration in Berlin on 20th September.” Reflecting on how his involvement in FFF has impacted his perception of the progress we can and are making towards a more sustainable society, Moritz has felt encouraged by the greater attention that has (finally) been given to the climate crisis and the countless people he has since met who are working tirelessly to save our future. However, his greater exposure to the realities of climate change have also revealed just how bad the present situation is: “there is not much to be hopeful about. The corridor for action is closing rapidly, but currently I don’t see anybody in power living up to their responsibility.”

So his call to action for the UWC community is this:

“I’m not a fan of telling people to change their individual behaviour - lobbyists are doing a good-enough job at this. But read about climate change, let the facts overwhelm you for a moment. And then give it a last try to prevent it! We might be just a few months away from a climate tipping point. I’m so inspired by people like Aru (UWC Mahindra College, 2015-2017) who organised the first-ever school strike in Pune, or Merlin (UWC Robert Bosch College, 2015-2017), who decided to lock himself to the fence of Angela Merkel’s office. Follow them if you can. Speak up if you can. Think about the story you will want to tell your grandchildren. And of course, hit the streets on September 20th.”