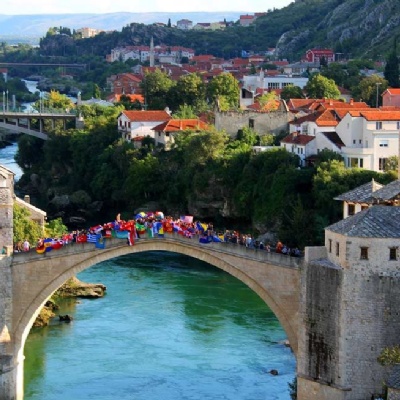 International school, UWC Mostar, extends scholarships to students including refugees affected by the US immigration ban

United World College (UWC) Mostar, a prestigious international school in Bosnia-Herzegovina, has announced today that it will extend scholarships to refugees and students from all seven nations affected by the recent immigration ban in response to the Executive Order "Protecting the Nation from Foreign Terrorist Entry into the United States" issued by US President Donald J. Trump. They will be invited to study alongside fellow students from the US and over 50 other countries to foster international understanding.

"UWC Mostar and the endowment “Bridge to The Future” aim to support the most promising young students from around the world who are in need. In these difficult and divisive times, we have specifically chosen to help students from the seven countries affected by the US immigration restrictions. We passionately believe that by bringing together the very best students from right around the world we can make sure that the next generation can shape a better society and future for us all.”

Founded 11 years ago, in a region dominated by the aftermath of war and continuing ethnic divisions, UWC Mostar is part of the United World Colleges. UWC is an educational movement launched in 1962 in the UK to address the Cold War by selecting scholarship students from around the world to live and learn together. It offers a two-year programme focused on experiential learning, community service and high academic standards to enable the students to acknowledge and value their differences and to discover their shared humanity. UWC students, including several refugees, are selected irrespective of their nationality, religious and ethnic background and socio-economic means. Two-thirds receive full scholarships.

"Around the Old Bridge in Mostar, symbol of Europe’s most bitter conflict after 1945, we are educating students from 61 nations and all of Bosnia’s ethnic groups together in one residential school to foster tolerance, international understanding and to combat all forms of extremism. We offer scholarships to US students, as well as to refugees and students from majority-Muslim countries banned by the US Executive Order to send a signal for peace.”

"The UWC movement's mission is to make education a force to unite people, nations and cultures for peace and a sustainable future. We do this across our 17 secondary schools and colleges worldwide, which welcome students from 155 nations and territories. I applaud the initiative of UWC Mostar and its endowment in London and I hope that the other UWCs will receive similar financial support to follow this example.”

To read UWC International’s official statement on the US Executive Order on immigration click here.

UWC (United World Colleges) is a global education movement that makes education a force to unite people, nations and cultures for peace and a sustainable future. It comprises a network of 17 international schools and colleges on 4 continents, a system of volunteer-run national committees in over 155 countries and over 60,000 alumni. Today, 9,500 students from over 155 countries are studying on one of the UWC campuses, including at UWC-USA in New Mexico. Through the Davis UWC Scholars Program, over 2,400 UWC alumni are currently studying at universities across the US.