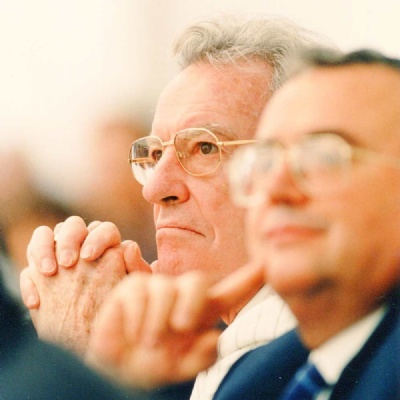 By David Sutcliffe, former Head of UWC Atlantic and UWC Adriatic and co-founder of UWC Mostar

The Frenchman Tony Besse has a unique and irreplaceable claim on our respect and gratitude. It was he who in 1960 put up the funds for the purchase for St. Donat’s Castle and estate, thereby making possible the opening of the Atlantic College in September 1962. Who knows whether, had St. Donat’s passed into the commercial hands that were eagerly waiting to snap it up, our Atlantic College and the United World Colleges would have ever seen the light of day? It was his faith in Kurt Hahn that inspired this awesome commitment to so groundbreaking, unproven and idealistic a leap into the underdeveloped field of international secondary education.

Tony’s father, the legendary ‘Anton Besse of Aden’, had been an immensely successful entrepreneur in the Middle East from the age of 22 and from 1900 onwards. Evelyn Waugh has given him literary immortality as Monsieur Le Blanc in his novel Scoop and also brought him vividly to life in his diaries, but it is perhaps the travel writer Freya Stark who most evocatively portrays his unusual business skills:

“… He is a merchant in the style of the Arabian nights … all day long telegrams come to him from India, America, China, Yemen, Africa, Europe … the office an arcaded room with lots of compartments with desks, each with some huge business of its own … a Parsi, an Arab, French, German, Englishman, Russian, running them …”

A passionate Anglophile, in 1949 he persuaded a strangely unwilling Oxford University to accept funds for a new college that would welcome foreigners and especially Frenchmen, leading to the foundation of the world-renowned St. Antony’s College which has welcomed many UWC former students to international post-graduate studies. It is a remarkable fact that two successive generations of the same family should have made such striking contributions to international education.

Tony Besse’ role in UWC was far from exhausted with his donation of St. Donat’s. After painfully difficult years struggling to keep his father’s businesses alive in the dramatically changing political conditions in the Middle East - the arrival of the Soviet and Chinese communist missions in the 1950s, the overthrow of the Ethiopian Emperor Haile Selassie in 1974, the emergence of the one-party communist state the People’s Republic of Ethiopia, the British withdrawal from Aden, the ‘nationalisation’ (confiscation) in June 1969 of all assets of the Besse company including his home, contents, pictures, papers, children’s toys - he found in his own words a new life with the United World Colleges: the setting up of their International Board of which he was the founding Chair, and the establishment of new national committees and new colleges under the forceful leadership of the movement’s first International President, Lord Mountbatten. Attuned to the Latin temperament, he became the essential link between the UWC Board and the regional government of Friuli-Venezia Giulia in creating the movement’s first college on the continent of Europe, the UWC Adriatic near Trieste, defying deep-rooted Anglo-Saxon scepticism on the way. For the Italians, he was ‘Mr. UWC’, and I seriously doubt whether this college would have opened without his absolute determination and unhesitating confidence in the final outcome. It was the same story for UWC Mostar. Hearing, in 2001, that there were to be soundings for a college in Bosnia Herzegovina, he insisted on coming along and covering most of the day-to-day expenses as well as underwriting the full budget for a year’s operation at the really critical stage. He was additionally invited to join the Council of Foundation of the International Baccalaureate of which he became the Vice-President from 1990 to 1993, thereby enabling him to help launch this pioneering college officially as ‘The UWC/IB Initiative in Bosnia and Herzegovina”. Some of us have regretted that we have been unable to take on more initiatives of this nature with our most natural partner in international education.

Tony’s embrace of international education arose, as with so many of our founders, from experience in the Second World War. In 1941, his parents Anton and Hilda Besse escaped the Vichy regime in occupied France and found their way back to Aden, leaving Tony and his sister in the care of a courageous English nanny. Physical fitness, a sense of adventure (Tony said "of boredom and youthful delinquecy") no parents to say ‘no’, and he was soon running errands for the Resistance, stealing German equipment, spending cold nights awaiting supplies dropped from allied aircraft; then his capture and interrogation by an elegant Italian officer who had been in Somalia and knew of his father.

“You have your life in front of you. Run!”

He ran. He has never talked easily of those days. The loss of several young friends, and the brutal and revengeful treatment of those who had collaborated with the German occupiers, left a hardened and independent son at war’s end whose temperament made life in his father’s offices unbearable. He fled to New York to earn his living as a taxi driver, but returned at age 24 to take over the business on his father’s death.

The Middle East left its mark on him. He felt the injustices of the Arab-Israeli confrontation daily and held and expressed strong views on them. Our Arab world advocates and interpreters have been few, and Tony often held this fort alone. Its importance is becoming clearer by the day.

The UWC movement measures its debt to Tony in his decisive contributions to the creation of three colleges, in his role in giving early structure to the business of the International Board and International Office, and in numerous smaller donations to scholarship funds, especially those for French and for Arab students, above all in recent years from Yemen. Those of us who had the good fortune to work closely with him will however remember above all his spontaneous personal generosity, the countless gifts, and the many occasions when he hosted memorable lunches and dinners to help win over influential new allies. Utterly typical was his response to the request to underwrite the planned activities of our Finnish graduate Pilvi Torsti who, in the light of his words, moved with her husband and two small children to Bosnia and Herzegovina for 18 months in 2005/6 to lay the final foundations for the college in Mostar:

‘Pilvi can make plans in the secure knowledge that she will not be running aground. I do not feel particularly happy or comfortable taking on this commitment but I am prepared to do it, against the odds, for the sake of not turning back. I believe in the project , and it is not in my temperament to give up or give in.’

Tony Besse is indeed one of our founding fathers.