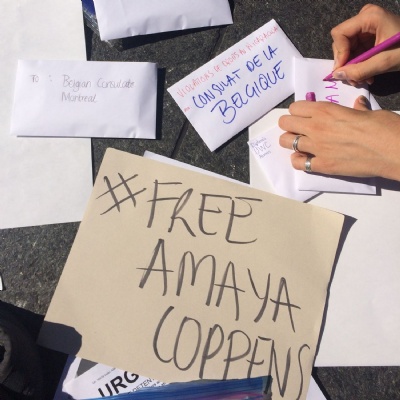 The UWC community has been closely following all news about Amaya Coppens, the Li Po Chun UWC alum who was arrested in Nicaragua on 10 September. UWC International has issued a statement asking for a “respect of the rule of law, human rights and the personal integrity of Amaya and other students arrested during the recent protests in Nicaragua.”

A court hearing initially scheduled for 10 December was suddenly pushed to 3 December. During this court hearing, the next court date was set for 28 February 2019 (article in Spanish here).

On 11 November, the Inter-American Commission on Human Rights (IACHR) decided to request the adoption of precautionary measures in favour of Amaya Eva Coppens Zamora and other prisoners at the “La Esperanza” prison. The request for precautionary measures alleges that the protection of the life and personal integrity of the beneficiaries are at risk and are allegedly subject to physical and psychological aggression in the centre by the penitentiary authorities as a result of the acts of violence. The resolution issued by IACHR can be read here (in Spanish).

This is set to be a long process and Amaya’s wellbeing is our primary concern. The support of the whole UWC community is key to keep her story alive in the media and to make sure she is not forgotten.

Protests keep taking place around the world, such as these in the UK and  Belgium. Make sure to share any actions you are taking in support of Amaya, and keep using the following hashtags on social media: #FreeAmayaCoppens #LiberezAmayaCoppens #LiberenaAmayaCoppens.