Shelby Davis: “How UWC Has Made Me a Better Me” 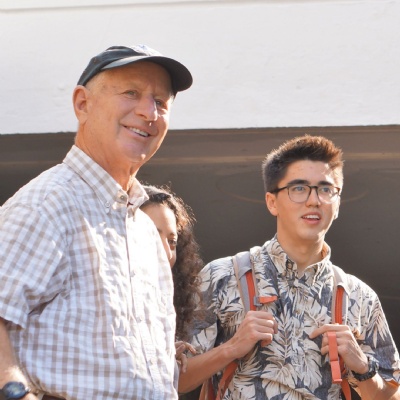 Shelby Davis is UWC’s greatest philanthropic supporter. Over the course of the last two decades, Shelby has invested in the UWC movement and its students through initiatives including the Davis-UWC IMPACT Challenge and, most recently, the Davis-UWC Dare to Dream Programme, which will allow 100 new students each year for the next 20 years to attend UWC - a gift worth $100 million USD. Shelby Davis has also given thousands of UWC alumni the opportunity to continue their education at the post-secondary level, through the world’s largest international scholarship programme for undergraduates in the world: the Davis United World College Scholars Program.

The Davis UWC Scholars Program recently published its 2018 Annual Report, which can be accessed here. The Report gives an impressive overview of the diverse group of UWC students who have benefitted this academic year from scholarships to one of over 90 US colleges and universities for their post-secondary education. The Report also includes a message from Shelby Davis, adapted from remarks he delivered at the opening ceremonies for UWC ISAK Japan in September 2017. In the text, duplicated below, Shelby sets out how UWC has “made him better”.

The UWC movement thanks Shelby Davis for his continued commitment to the UWC mission to make education a force to unite people, nations and cultures for peace and a sustainable future. There is no question that Shelby, with his immense generosity, commitment and faith in the UWC movement, has made UWC better as well.

“I want to try to answer the question I often get when I speak about philanthropy: why UWC? And why me? I believe education creates possibilities. It’s always about young people and their futures, and we all realize that with education, young people have more possibilities than without it. I am investing in UWC students, in particular, because I believe they are getting a special brand of education at UWC schools. They tell me this, over and over in their letters and when I meet them. Their teachers and professors tell me this, too.

I have been very lucky in life, both in business and now in philanthropy. It probably started with my parents. I believe I got most of my business genes from my father, and my humanitarian genes from my mother.

My father was a realist and a doer; my mother was more an idealist and a dreamer. Both were internationalists. They got their Ph.D.’s in the early 1930s in one of the most international cities of the world, Geneva, Switzerland, which at that time was home to the League of Nations, forerunner to the UN. My parents introduced me to the world on two different summer trips, going around the world on the famous Pan American Airlines. Pan Am allowed stopovers, and we must have visited 25 or 30 countries — and in almost every case they knew people to visit. All this made a big impression.

My parents also suggested that I follow a road map for life’s journey: the first 30 years of your life, focus on learning; the second 30 years, focus on earning; and the remaining 30 or so years of your life, especially if you’ve been lucky and successful, focus on returning to help our world. Notice the word focus came up three times. That probably meant always focus on something, and stick to it.

These thoughts stuck in my mind as I approached age 30, when I left a secure bank job to take a risk and start my own investment management firm. It happened again as I was approaching 60, with UWC. It must have been fate that I learned about the UWC schools scattered across the globe, visited one, and read a sign on the school bulletin board that said, “Our world needs dreamers, and our world needs doers, but most of all our world needs dreamers who do!”

My parents could not have said it better. And here I was at the right age, at the right time, and finding the right cause. Right on schedule.

I started listening to UWC students in their own words. One opening day at UWC in Mostar in its early years, via YouTube I heard a second-year student addressing the first-years. He said that just one year ago he was as nervous as you are now, but relax.

“You are about to have your eyes, ears, and minds opened to the world,” this student said. “Trust me, this year will change your life. You’ll be living daily with different cultures, religions, races, and habits — but that is the magic of the UWC experience. By next year, you will realize that UWC has made you a better you, and one of you will have the honor of addressing the new students.”

I feel the same way. UWC has made me a better me. Being around motivated kids with winning habits who want to be changemakers keeps me young at heart, more optimistic and more energized. And what is a changemaker? In her graduation speech, a UWC student from Mexico said it best to her classmates: “It means helping make the difference between what our world is and what our world deserves to be.”

At another UWC graduation, a Japanese student named China Fuji said this: “The compassion we have felt for each other daily, and the teamwork we have accomplished together, is proof that our collective spirits can push humanity toward a brighter tomorrow, a day when every person, every religion, and every culture is united.”

UWC kids come together, work together, and almost without knowing it learn the lesson of leadership espoused by Dwight D. Eisenhower. He said leadership is like pulling a string across a table. It will follow. Push it and it will go nowhere at all.

A UWC T-shirt summed up the life-changing magic this way: “We came as strangers, we left as friends. We came expecting, we left remembering. We came as many, we left as one. We came empty, we left fulfilled.” Julie Payette, a UWC grad from Pearson College, became a famous astronaut who made two trips to the space station and orbited the world countless times. Now the newly appointed Governor General of Canada, Julie said this in a speech she gave when I attended my first graduation at UWC-USA: “From space, just 80 miles up from Earth, as you orbit and watch day turn to night and light to dark, over and over, our beautiful world has no borders.”

That’s the dream of many at UWC. John Lennon ended one of his most famous songs this way: “You may say I’m a dreamer, but I’m not the only one. I hope someday you’ll join us, and the world will live as one.” This song is the song I hear most as I travel to international shows the students put on at UWCs.

So that’s why I invest in UWCs and their students. Like the research analyst I was, I like checking up as I invest — and I have visited all 17 UWCs around the globe at least once.

At this age, I often think of words of wisdom given countless times by John Wesley, a roving minister who lived between 1703-1791, and who eventually founded the Methodist Church. He delivered sermons and prayers, on horseback in rural England and the southern United States, and he often ended with these words: “Do all the good you can. By all the means you can. In all the ways you can. To all the people you can. As long as ever you can.”

For more information on the Davis United World College Scholars Program, click here. To access the 2018 Annual Report, in which this message from Shelby Davis was originally printed, please click here.