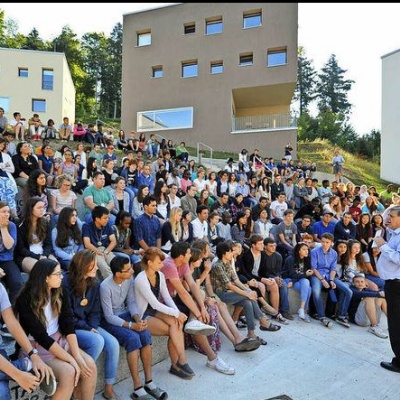 Christian Hodeige (Pearson College UWC, 1975-1977) is the editor of the German newspaper Badische Zeitung. He co-founded the German UWC National Committee in 1986 where he served as President, and was elected to the UWC International Board in 1996. Christian is a founding member of the Board of UWC Robert Bosch College, and currently serves as its Vice-Chair.  Reporter Julia Littmann interviewed Christian during the annual UWC Heads Meeting, which was held in Freiburg this year at UWC RBC.

This interview originally appeared in German, in the 25 October 2017 edition of Badische Zeitung and on Badische-Zeitung.de.

Mr. Hodeige, you were not unhappy at your local German high school… What made you want to attend a United World College?

As happy as I was at my school, I always had this strong feeling, this certainty, that there had to be something else. For a young man like me, this something else was the internationality one can witness at UWC. I still thank my parents for supporting me through every step of my application. It would not have been possible without them.

Did you ever feel homesick?

No, never. I was too fascinated by what was happening around me to feel that way. You must understand, students hear so many different life stories during their time at a UWC school or college and these stories make them realize one very important thing: No matter how diverse the community, you will always find similarities and common ground between people, which will connect you and form an intense bond.

What really stuck with you from your time at UWC?

Oh, lots of things. For one, the sudden realization that your home country, in my case Germany, is not the epicenter of the world. For me, this realization also entailed a deep reflection about my national identity. What does it mean to be German? Especially in the beginning, when you don’t know your peer’s names yet and just refer to them as “the Indian”, “the Swede” or “the German” you automatically associate certain characteristics and stereotypes with this classification, some of which even they had never thought or heard of. This leads to great discussions. It really stimulated me to think about the way I and others perceived national identity and opened my eyes to the fact that I was more influenced by my local culture than by my country’s. Nevertheless, students quickly form a form of mutual respect, making them realize what an enrichment this diversity is. I was part of the generation which came after the Second World War, composed of the children of the parties involved. Sharing a room, performing extracurricular activities and learning together brings teenagers together, no matter where they are from. All over the world, UWC students experience that peace is not a utopian concept, but something that is possible. Peace becomes so much more than just a phrase.

It almost sounds as if there was never any conflict, never any argument…

Oh no, there was! The intense life you lead in this very tight community can be quite exhausting, not everybody is made for it. What was new for me was how open the discussion around these conflicts was. We sometimes talked for hours to resolve our problems and as demanding as that may be, it is incredibly helpful.
UWC is a strong symbol of the founder Kurt Hahn’s pedagogical philosophy. What did you take away from it?
I am still puzzled by the constructive relationship this philosophy allows teachers and students to form. We did not only learn from our teachers, but with them. This way of teaching is incredibly popular and effective with young people regardless of their origin. I was heavily influenced by my teacher Larry Hubbert. He had been a manager, but decided to become a teacher at Pearson College UWC. His liberal way of thinking amazed me on a personal level and nurtured my interest in economics, an interest which lasts until today.

You are deeply involved in the UWC organization: Not only did you advocate for the construction of UWC Robert Bosch College in Freiburg, but you are engaged in many other ways. Where do you get your strength and determination from?

I am just incredibly in love with the UWC idea. It stuck with me. I have been involved with UWC continuously for more than 30 years. One can only do this if they are completely sold on the concept - and I am. We transfer responsibility to students at a very early stage to teach them respect and mutual compromise, which are incredibly important values for UWC. Furthermore, we try to talk about the important topics and issues of our time. We were talking about pollution and climate change before anybody else was. Canadian UWC graduate Julie Payette, who became an astronaut, even showed how pollution can be seen from space and included this in her research.

Today, Julie Payette is Governor General of Canada, but is it

common for UWC students to return to their home countries after graduating from a UWC?

We are often accused of being a “brain-drain”, meaning we make educated and specialized people leave their country to work abroad. This is a very big misconception. Numerous students return to work and study in their countries of origin after their graduation. They leave UWC as citizens of a global world, believing in cross-country cooperation and global responsibility. This special spirit is present in all UWC schools and colleges.

As you said, it seems to be very present at the United World Colleges, but what about the “real” world? How were the first months back?

As it is for all UWC students, the first few months back were hard. For one, I felt distant to all of those who did not have the same experience I had. It also took me some time to get accustomed to the vibrant metropole of London, especially after having lived in the Canadian wilderness for two years. But it would have probably taken me much more time if UWC had not taught me one essential lesson: be curious about everything you see and try to explore the world!

Having visited all the UWCs, do you have a private ranking?

I do not, since every UWC has features that clearly distinguish them from one another, allowing for a unique experience to be made at every single one of them. Nevertheless, I do feel deeply connected to UWC RBC in Freiburg, since we have searched for the right place to establish a college in Kurt Hahn’s country of origin, Germany, for almost 30 years. I am not only very happy that we could make this project come true in Freiburg, but also that we have found such excellent, qualified staff to run the college. Without their outstanding work, none of this would be possible. Furthermore, I also have a connection to Pearson College UWC. It taught me the north American way of life. I also lived near the sea for the first time, which for me is always linked to a deep feeling of freedom.

When looking at the world today, what defines the “UWC Point of view” for you?

The ability to understand that the achievements of one region or of one culture cannot and should not be transferred to other regions and cultures. This is closely linked to the understanding that there is always more than one correct answer. Some cultures might find the way we treat our elderly repellent, but that makes neither us nor them wrong. It really makes us question how we, as members of a Western society define words such as majority, democracy and freedom. The creativity and the courage necessary to communicate between these different opinions and perceptions are learnt by UWC students all around the world and that UWC experience, this “UWC Point of view” as you called it, is something that cannot be taken away from the students ever again.

The purpose of this year’s UWC Heads Meeting is to vote on a new strategy. Can we expect drastic changes in the near future?

No. We are very preoccupied with the question how pertinent our colleges will be in the future. The Canadian politician Lester Pearson once said: “How can there be peace if people do not know one another?” We say: “How can people know one another if they have never met?” They do meet at our schools and colleges. That is why we believe that the ratification of the new strategy will be a historical moment for our movement. In my opinion, United World Colleges are more important today than they ever were before. We do not build walls, we are inclusive rather than exclusive. That is what is needed today!

For more information on Christian's work with UWC, please see his profile.

For the article in its original German, please see the attached file below.