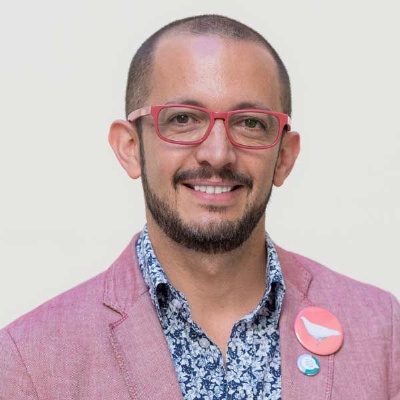 At the age of 11, Robert Tomalin heard of the UWC movement when his Primary School Head Teacher, Ted Wheatley, suggested he should apply (five years later) as he thought Robert would be a good candidate. Ted’s son, Daniel, attended Waterford Kamhlaba UWC of Southern Africa in Swaziland and so Robert heard many stories of his adventures during many school assemblies. Five years later Ted sent him the application form (through the post!) and so Robert applied and went on to spend two years at UWC Adriatic.

Although British born, Robert has been the President of UWC Colombia since 2013 and was also nominated to sit on the UWC Council beginning in 2016. Professionally Robert has been the Head of Secondary at Colegio Gran Bretaña, an IB World School in Bogotá, since he arrived in his new home back in 2011, and as of August 2017 he will become the whole school Director.

When asked why he volunteers for UWC he replied "I love learning and teaching, and feel that I have a huge debt that needs repaying. My whole life changed radically, purely because Mr Wheatley saw something in me that he wanted to nurture, and as a result the way I saw myself and my place within the world changed dramatically. Now it is my turn to look for young people who will not only get a lot out of a UWC experience but also contribute to our wider movement. What better place than here in Colombia to do just that?"