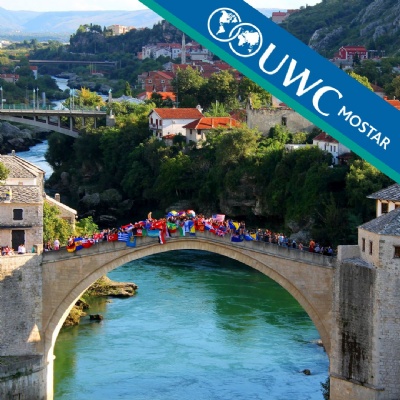 UWC Mostar seeks to appoint dedicated and inspired educators who are committed to the intellectual, social, and ethical development of students and who recognize that learning also takes place beyond the classroom. UWC Mostar values candidates who are drawn to the particular educational experience of the United World Colleges, and to UWC Mostar’s unique mission within the movement.

Vacancy notice for available positions in the school year 2020/2021

Founded in 2006, UWC Mostar was born out of a conviction that international education should be
taken “not to where it can be afforded but to where it is really and urgently needed”.

While sharing a mission and educational model with the other 17 United World Colleges worldwide,
UWC Mostar, located in the Balkans, has always been distinctive in having an explicit aim to
contribute to the reconstruction of a post-conflict society.

Uniquely, UWC Mostar came into being as a result of UWC and the International Baccalaureate
Organization joining forces in a pioneering initiative in Bosnia and Herzegovina (BiH). Together they
sought to develop a template for a convincing classroom model which could “open new avenues for
the country’s education system”.

UWC Mostar’s symbolic location within an existing national school, the Gimnazija Mostar, and its
recruitment of a significant proportion of students from all national groups in BiH, and students from
the nearby region, in addition to students from all around the world, speaks of its initial mission “to
equip the next generations of young people in Bosnia and Herzegovina with the knowledge, skills,
leadership qualities and international values, necessary to bridge the still existing ethnic divisions and
move their country into the 21st century”.

This one-off manifestation of UWC is looking for a strong, inspirational, compassionate leader who
will build on the work of the founders and the successes and emerging challenges of its first 15 years,
and have the vision to shape its future --- a leader who will find ways of strengthening, motivating and
unifying the diverse UWC Mostar community of staff and students in their fulfilment of core UWC
values and the specific enactment of these values within the local context.

The post entails all the management functions of UWC headship necessary for the smooth operation
of the College within the framework of the mission and all relevant laws and regulations (Including overall responsibility for the broad education programme, student health and well-being, residential life, staff
appointments, student admissions, staff performance and development, finance, administration, infrastructure and UWC networking, amongst others.)

Importantly, however, the role additionally involves looking out from UWC Mostar to the local and national context with a view to raising the college’s profile and finding tangible ways in which it can have an impact
and make a difference.

Appointed by, directly responsible to and supported by the College Board, the Head also has a
relationship with the College’s founder (Foundation Education in Action) and the UWC International
Office.

To adapt a quotation from Kurt Hahn, to whose enlightened educational philosophy UWCs owe so much: “what is needed is a wise person who has the nerve to lead and a person of action who has the
imagination to see the consequences of those actions”.

Remuneration: the salary will be competitive in the regional context.

Further information may be found on the websites of UWC Mostar and UWC.
Candidates interested in this position are invited to send a letter of application that specifically
addresses the post advertised and gives some indication of the appeal of UWC Mostar. This letter,
accompanied by a CV, should be sent to Nina Cisic, Secretary of the Board of UWC Mostar
(nina.cisic@uwmostar.ba) by 16 October 2020.